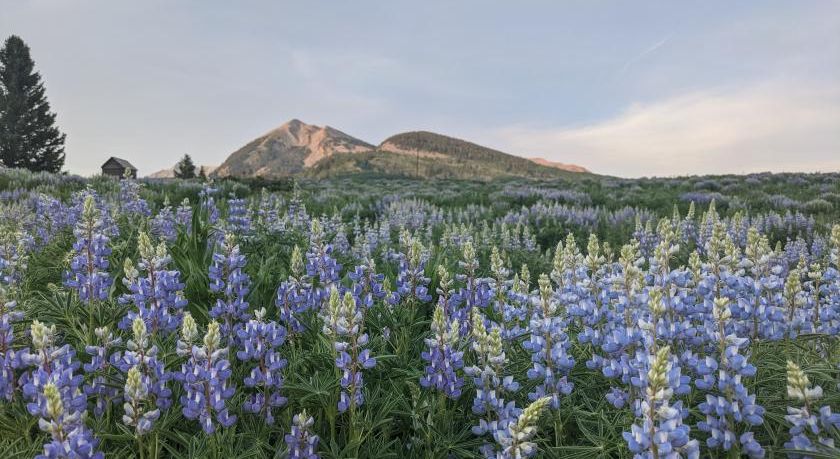 Melittology, the bee-you-ti-ful study of bees, may seem like an obscure subject.   However, one-third of the calories that humans eat come from plants which are pollinated by insects and animals, with bees being a major pollinator, alongside butterflies, wasps, hummingbirds, and many other types of pollinators.  Plants can also pollinate themselves or rely upon the wind.  But breakfast would be less cheerful without pollinators; our oatmeal might lack fruit and we might be drinking water instead of coffee or orange juice.

The absence of honeybees has meant that the Gunnison Basin, and Gothic in particular, has long been a mecca for pollination and bee biologists.  There are approximately 4,000 native bee species in North America (and more than 20,000 worldwide).  However, once honeybees traveled to North America with colonists in the 1600’s they began disrupting native pollinator communities.  With long winters and cold temperatures honeybees never established themselves in the Gunnison Basin.  That is great for residents and visitors to the Gunnison Basin, since honeybees are a poor substitute for native bees in servicing many of our native wildflowers.  It is also great for scientists that want to understand native pollination systems.

Following the virtuous cycle of scientists generating knowledge that attracts more scientists, much of what the world knows about pollination comes from RMBL.  Early research on bee foraging behavior and wildflowers attracted more scientists.  A scientific publication that gets 100+ mentions in the scientific literature is hot stuff.  Techniques for Pollination Biologists by RMBL scientists Dr. Carol Kearns and Dr. David Inouye has been cited 2500+ times; a paper on generalization in pollination systems led by RMBL scientist Dr. Nick Waser is coming up on 2000 citations.  Someone once told me they attended a conference on pollination in northern Europe and almost everybody there had worked at RMBL at some point in their career.

The adjoining article on Dr. Jessica Forrest highlights the virtuous cycle.  Her work on the population biology of bees builds upon, and contributes to, the growing body of knowledge about pollination and bees.  Her research is already attracting more bee biologists.

This research matters.  How will changes to the environmental clock disrupt the relationships between plants and their pollinators?  Read about work by Dr. Carol Boggs and Dr. David Inouye in the NY Times.  What is the visual world that hummingbirds live in, a visual world defined by wildflowers?  Read about work by Dr. Cassie Stoddard in the Wall Street Journal.  How resilient will plants be if we start to lose pollinators?  Read about Dr. Berry Brosi’s work in the National Geographic.

Unfortunately we don’t have the resources to study pollinators everywhere.  But, intensively studying pollinators and their plants at RMBL gives us a cost effective way to understand and manage pollination systems across the world.  The Power of Place!