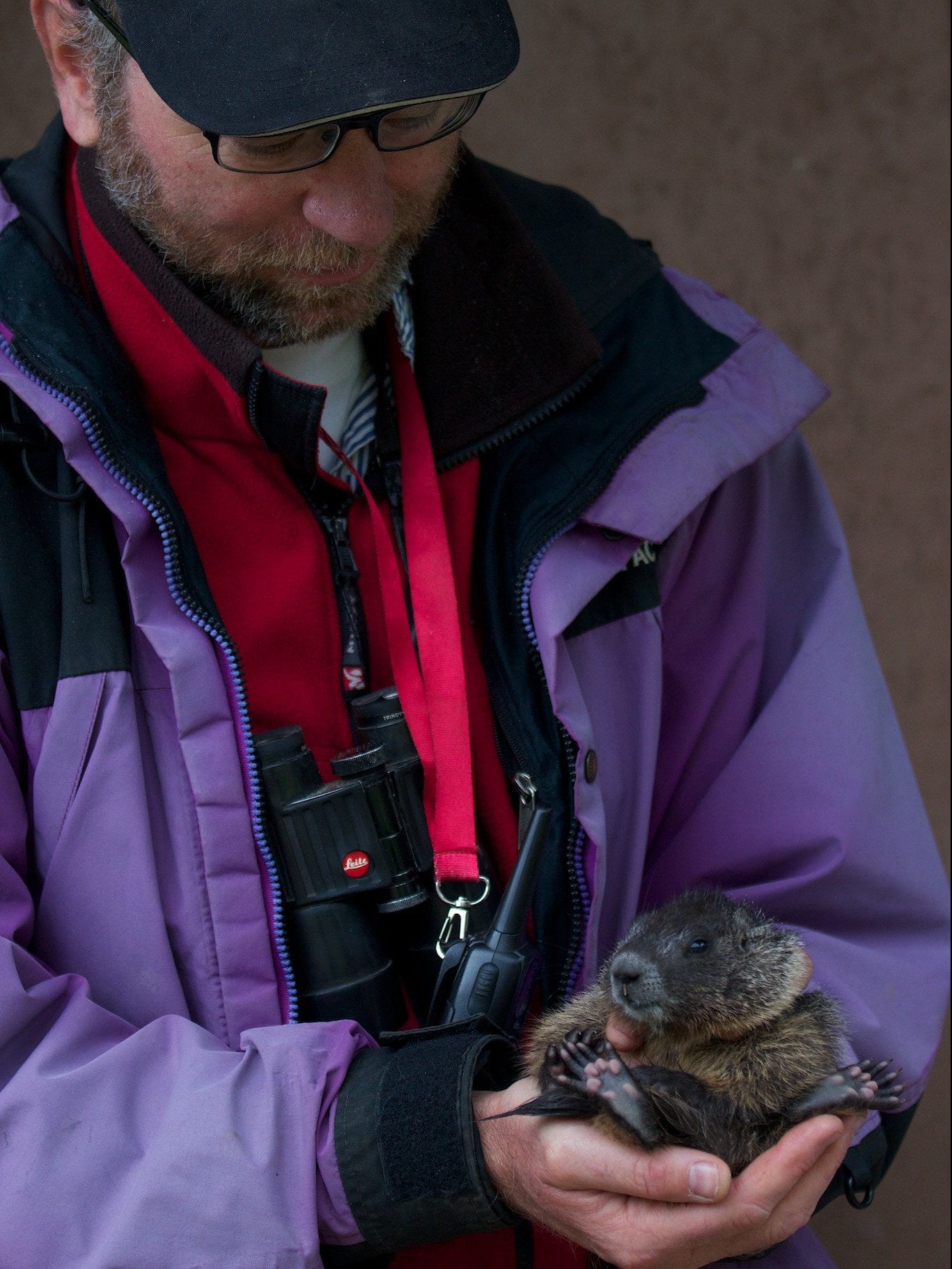 We’re mad for marmots. What’s not to love? First, they’re adorable (especially the babies). You know the chubby, furry guy that emerges in February to predict the duration of winter? He’s a groundhog, which is one of the 15 species of marmots. And his close relative, yellow-bellied marmots, are found all over the mountainous western U.S. in elevations ranging from sea level up to almost 15,000 feet. Yellow-bellied marmots are abundant at RMBL.

Besides the cuteness factor, marmots are really attractive to biologists because they’re a handy resource for studying how animals respond to climate change, what animals get (if anything) by being social, and a whole host of other useful knowledge. They’re active during the day (so you can see them), have an address (their burrows make them easy to find), and their seasons of wakefulness and hibernation roughly coincide with the academic year.

Prof. Dan Blumstein has been studying them, and leading the Marmot Project at RMBL, since 2001. He took over from Ken Armitage, who started the study in 1962. That’s only a year after Jane Goodall started studying chimpanzees at Gombe Stream National Park in Tanzania, which is the world’s longest running study of mammals in the wild. So RMBL researchers are in good company.

One question that has required years of study is understanding the adaptive value of being social, and the RMBL marmots are great for this because they live in a variety of social situations. Many marmots live in small, familial groups, usually a female and her young, while males wander from female to female spreading their charms. But sometimes, marmots live in colonies with 50 or more individuals. What are the benefits from living with others? Certainly, having more eyes around to detect predators must be a good thing, and marmots often signal that they’ve detected a predator to others with their whistle-like alarm calls, hence the animal’s nickname, whistle pig.

Dan’s work has shown that social relationships matter. But not in the way you might expect; nice females finish last! When adult females are nicer to each other, they’re less likely to reproduce and tend to have smaller litters. In fact, researchers are finding that animals more closely affiliated with each other are less likely to survive winter. So are social networks good or bad? It’s a topic that Dan and his group continue to study.

Looking at marmot social relationships can yield insights about human health. Recently, scientists concluded that social relationships are so essential to humans that isolation is as harmful to longevity as smoking a pack of cigarettes a day. Marmots are helping us learn more about things that have biomedical relevance.

You can’t gain knowledge like this with one or two years of observing marmot behavior, which points to the priceless value of long-term studies. With nearly 60 years of data under their belts, RMBL scientists are sitting on a gold mine of potential discoveries.

Take climate change. We know that with warming temperatures, marmots are waking from hibernation earlier in the season. With a longer growing season, they’re getting heavier. Whether that will help or hurt is uncertain. But one thing we do know is that if they’ve evolved to be active a certain length of time, and that period is now longer, they will have more chances of being killed by predators, traffic, or what have you. As Dan said, “They may be open for business too long.”

One of the questions Dan’s team has explored is whether there was a genetic variation in the timing of the marmots’ emergence from hibernation. In fact, they found that there was. This observation was surprising to Dan. He predicted that marmots would be very flexible in how they respond to seasonal differences in winter length and didn’t expect to find a strong genetic signature. After all, their habitat in Colorado alone has almost a 10,000-foot range. But in a forthcoming paper, Dan’s group shows that there is also genetic variation in hibernation length. So unlike species that are stuck in a rigid annual schedule, marmots have two potential ways to respond to the increased variation in winter length that we’re seeing now, and this may be why yellow-bellied marmots are doing OK…for now.

But the research goes on, and the more we study, the more we learn. Except for this year. Reflecting on the damage the current pandemic will wreak on the Marmot Project, Dan said, “Since 2003, we’ve been looking at emergence from hibernation. We’re not going to get these data this year … and we are likely to lose data on pup survival and lifetime reproductive success  — an essential variable that lets Dan’s group study evolution — if we can’t catch them when they start emerging from their burrows in late June or early July.”

Dan recognizes that the coronavirus pandemic is causing a lot of suffering around the world, but notes that “the long-term marmot data set and other such long-term studies are legacy resources that are bigger than any one person or any one group and are essential if we are to understand how to manage the biodiversity on which we all depend.”

Given that RMBL is the epicenter of long-term studies, we know that regardless of present setbacks, it will survive to continue producing discoveries that matter to science worldwide.

For a lab that’s been open through the Great Depression, World War II, the 2008 downturn, and other periods of crisis, Dan predicts that while RMBL may be down for the moment, it will never be defeated. Not as long as there are marmots, and scientists who love watching them, around.

Dan Blumstein
Daniel T. Blumstein is a professor in the Department of Ecology and Evolutionary Biology and in the Institute of the Environment and Sustainability at UCLA. Between 2009 and 2016 he was Chair of the Department of Ecology and Evolutionary Biology. Dan is broadly interested in the evolution of behavior and conservation biology and the integration of behavioral insights into other disciplines. He co-directs the UCLA Evolutionary Medicine Program. He has led the Marmot Project at RMBL since 2001.