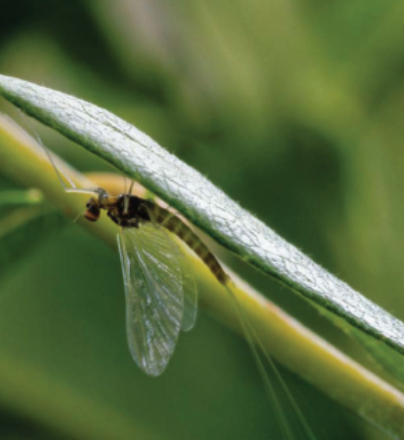 One of our long-term RMBL scientists has submerged herself in research on streams for nearly 50 years. Dr. Barbara (Bobbi) Peckarsky came to RMBL in 1974 as a graduate student and took an aquatic ecology class from the late Dr. Stan Dodson and his wife Ginny of the University of Wisconsin. After getting her feet wet with field station research, she was smitten. RMBL has been her summer home ever since.

Her work has always been about streams. She originally was interested in predator-prey interactions between stoneflies (predators) and mayflies (prey) and soon became a recognized expert in the field.

But one thing led to another, and she added another stream dweller to the mix: brook trout. For more than 15 years, she studied streams both with and without trout to understand the impact of trout on the behavior of mayflies. Bobbi calls this the “follow your nose” scientific method that arises from “Ecology of Place.” You look at one or two species and you can’t help but notice other life forms that are part of the same ecosystem. New research questions thereby boil up out of the familiar system.

Surprisingly, her research team found that despite being the favorite prey of trout, there were more mayflies in streams that had trout than in those that didn’t. What researchers discovered was that when mayflies smell the essence of trout in the stream, they accelerate their development and emerge as adults sooner to spend less time in the more dangerous habitat. In addition, the females of a certain mayfly species, Baetis bicaudatus, are pretty clever egg layers. Most mayflies are not so particular about how they lay their eggs. But Baetis females are different. They find a rock that protrudes from the water, crawl beneath it, and carefully deposit their eggs. More large, stable rocks protrude out of trout streams than streams without trout and provide better protection for eggs. More mayflies lay eggs, and more hatch in trout streams than in those without trout, which is why there are more of these vulnerable mayflies in streams where their most dangerous predators live.

This research led Bobbi to yet another study looking at the effects of climate change on streams and stream dwellers. As it turns out, changes in temperature and water flow affect bugs, fish, and algae alike. Warming temperatures and extreme fluctuations in the water flow (hydrology) such as floods and droughts narrow the egg-laying window of the mayflies.

Bobbi’s team is also looking at the impact of high and low snowpack on streams. Long-term patterns show that the amount of snow is reducing, and it’s melting earlier. But it’s also erratic. Sometimes an extremely dry year, which causes low stream flows, can be followed by a record high snow year with high water flow. Such anomalies further influence the seasonal window for mayflies to lay their eggs.

Another consequence of warming streams is that in low flow years, a nuisance diatom called Didymosphenia geminata, nicknamed “rock snot,” proliferates, affecting both fish and mayflies. An abundance of Didymo cuts the growth rates of brook trout populations in half and also reduces the ability of mayflies to feed on their preferred algae on rocks on stream bottoms. With two dry years in a row (as in 2020 and 2021), Bobbi is certain that we’ll have a bumper crop of Didymo this summer.

Mayflies have already adapted to coexisting with trout, but who knows the long-term effect that human-accelerated climate change will have on our streams? What we do know is that Bobbi’s long experience at RMBL has yielded many novel scientific pursuits and not only more answers but more questions as well. Long-term studies like hers are what make RMBL an ideal place for case studies that can inform other ecosystems worldwide.

In her nearly 50 years with RMBL, Dr. Bobbi Peckarsky has plunged into a world of knowledge about streams. And her curiosity still runs deep. There’s no danger of that drying up anytime soon.

Bobbi Peckarsky is a professor emeritus at Cornell University and an honorary fellow and adjunct professor at the University of Wisconsin Madison. She’s been coming to RMBL since 1974, first as a coursework student, then as a PhD student, faculty member, Board of Trustees member, and senior investigator. Her research interests include predator-prey interactions between fish, stoneflies, and mayflies; mayfly-algae interactions; and the effects of flow disturbances and climate-change-induced alterations in temperature and hydrology on invertebrates and algae in streams around RMBL. She continues to build a long-term (now 45 years) dataset of invertebrates in streams protected by the non-consumptive water rights RMBL obtained in the 1970s.