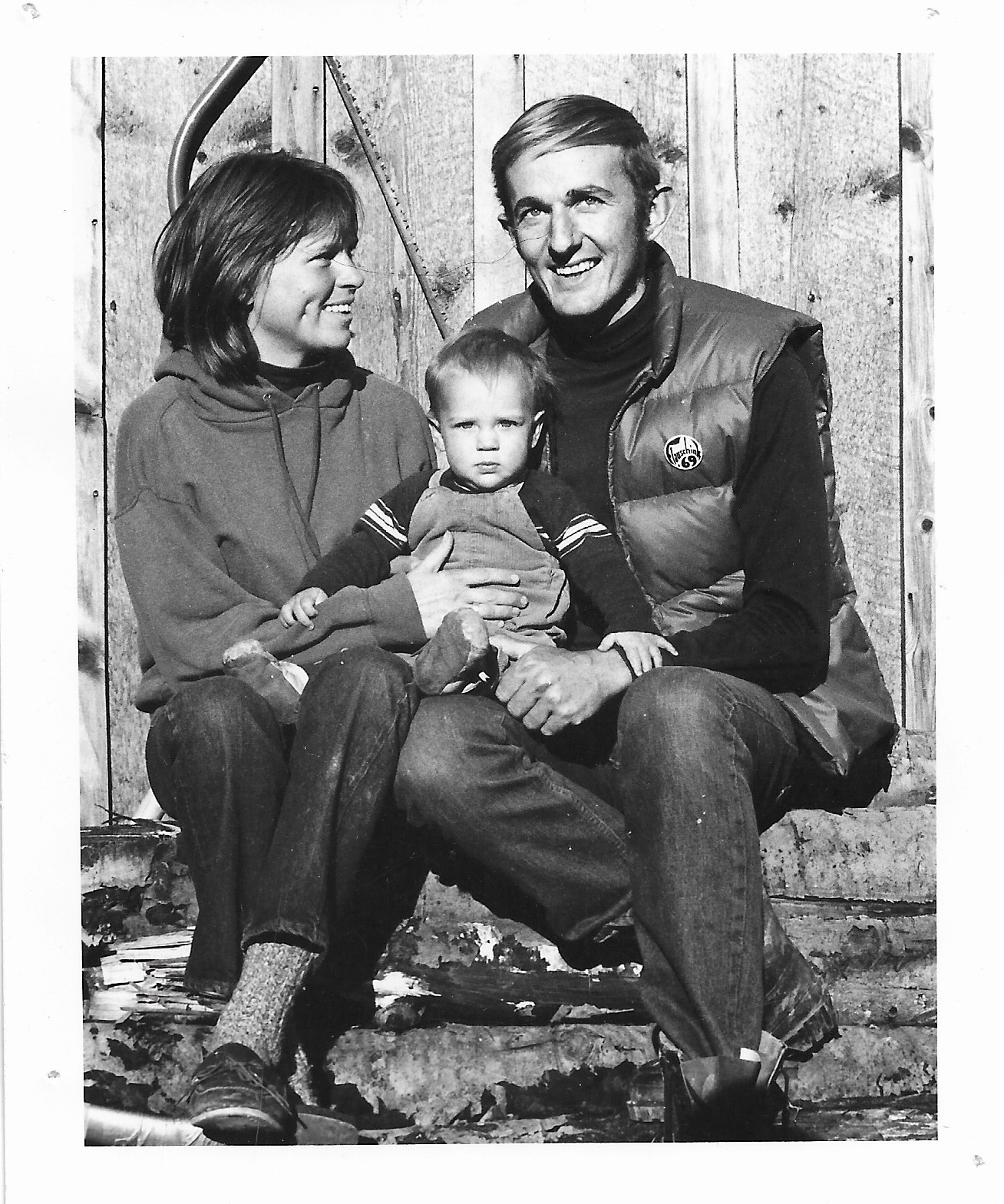 Caretaking the Lab in Winter by George Sibley

RMBL’s winter caretaker program turns 50 this year; this is an account of how it started, and of our experience as the first caretakers in the winter of 1971-72 – myself, my partner Barbara and our seven-month-old son Sam.

Barbara and I were a little burned out at what we were doing in Crested Butte – Barbara as a wooden sign artist, and me as the only employee of a very small newspaper. A job I’d gotten into because “I want to be a writer,” but three years convinced me I did not want to be a newspaper business manager, ad salesman, et cetera. We were chronically broke, so we were thinking of leaving Crested Butte, and going back to the mainstream of what passed for civilization in 1971 to find work where we could make a little money, or failing that, going to graduate school on government loans and grants to get some “real-world” credentials for finding work.

But then one evening, discussing with friends where we might go and why over spaghetti and Carlos Rossi, it kind of popped into my mind, then out of my mouth: “What I’d really like to do is persuade RMBL that they need winter caretakers, then apply for the job and move up there to work on our stuff for the winter.” Barbara looked at me, shocked, having heard nothing about this – then said, “What a great idea!”

It did require talking RMBL into the idea, which makes more sense today than it did then; Nordic skiing was just becoming popular in the late 1960s and early 70s, and relatively few people were trekking into the backcountry beyond the plowed roads. We could, however, make the case to Chris Johnson, then RMBL director and a friend, that this would soon change, and it would be good for RMBL to have a year-round presence in the East River valley. That proved to be true enough: the first winter we were there, less than a dozen people skied as far as Gothic; by our fourth year, there were that many every weekend day.

At any rate, Chris came around, to the extent of saying, we’ll try it so long as it doesn’t cost the Lab anything but the use of a cabin.

So instead of returning from the edge of civilization to one of its centers, we surprised ourselves by moving a few miles beyond the edge. Early in September 1971, we settled into a 16 by 20 cabin on the sunny side of Gothic. We had a strange mix of “conveniences” there – we had electricity, a countertop refrigerator, and a gas stove with extra propane tanks out back, but the only general heating was a wood-burning potbelly stove.

And there was no indoor plumbing. Gothic had a water system but for summer use only – pipes buried only a few inches deep. There was, however, a covered spring a couple hundred feet up from the cabin that ran year-round. And there was a lovely south-facing outhouse a mere 50 feet from the cabin; we had an indoor thunder mug for night needs.

All told, it looked like living rough, and most of our friends thought we were absolutely crazy – maybe even borderline criminal crazy, taking a seven-month-old baby into such a situation. Other friends would get a kind of a faraway look in their eyes when we told them what we were doing, and we realized it wasn’t just our idea.

It was, however, no Thoreauvian exercise in self-sufficiency. We were, if anything, more conscious out there of our near-total (and not that healthy) dependence on a large, wealthy, and maybe somewhat indulgent civilization. We had enough money to lay in a winter supply of “heavy goods” – cases of canned soup and vegetables and condensed milk, bags of brown rice and beans, flour and sugar and other staples, a couple 30-pound boxes of peanuts for the protein, and a few cases of Carlos Rossi’s finest. We did not become total vegetarians there, but we reduced our meat consumption considerably – Barbara could make a chicken brought back from town last a week.

We settled into a routine, once there: I had my old rolltop desk in one corner of the cabin; Barbara worked on her woodcarving at the cabin’s table. Sam had to put up with two parents 24/7 but didn’t seem to suffer from it. From the 50-year perspective, I think it was a much saner existence out there in the wilds than we would ever have found back in the hard heart of civilization.

Morning was work time; afternoon was chore time, chop wood, carry water. We had a beautiful Second Summer that year, and spent most of those afternoons out gathering firewood, taking Sam along to watch. We didn’t have a chainsaw, so were limited mostly to aspen that we could cut up with a bowsaw. RMBL let us use their ancient pickup truck, which we would fill up with eight-foot lengths, to saw up later at the cabin.

There are certainly worse ways to spend fall afternoons than out among aspen, through their almost psychedelic transition from green to gold. And with the bowsaw rather than a chainsaw, our presence there was more of an infiltration than an assault; so long as we left the living alone and just took the dead, the trees continued their own conversations. The bowsaw also kept us in shape.

Wood hauling with the pickup lasted into November that year, but then the snow started coming – no huge storm to launch the snowpack that year, just a series of six- or eight-inch storms that eventually made it time to park the pickup for the winter. Time also to park our car in a friend’s driveway in Mt. Crested Butte and take to the skis.

From then on, chores were done on the “webs” – snowshoes – I’d bought at Tony Mihelich’s Hardware.  That was about 40 years before the advent of sleek lightweight aluminum snowshoes. The webs I got from Tony had wood frames with strips of some kind of animal hide for the webbing and were neither sleek nor lightweight. The webs were a Farmall tractor compared to the Ford Mustang of the wooden skis we used for traveling to town and around the valley, but for chores around the cabin, the tractor was what we needed.

Once the snow began to pile up, we realized the absence of automobiles freed us from living our lives at street level; we could live on the surface of the snow. We only had to shovel steps up to the surface from our entry doors; then we used the snowshoes to pack out trails to the spring box, the outhouse, the sawbuck. After a couple days of sun, those trails would be firm enough to walk on with just our boots. That worked anyway until the snowpack started to melt; as the snow “rotted,” we were frequently literally up to our butts in wet snow.

For water, we used two five-gallon jugs filled at the spring – which did in fact run all winter. The tedium of filling the jugs with a pan and a funnel was balanced by the opportunity to keep an eye on Gothic Mountain, presiding over the valley. Even when the weather was bad, the mountain was there – in parts and glimpses, making it even more of a presence in the mind’s eye. Once the snow was on it, there were days at the spring box when I could not tell where the mountain ended and the sky began.

We used around five gallons on a normal day, which meant usually filling one jug a day; but laundry day used both jugs. It’s surprising how little water a household really needs when there are no flush toilets, and basin baths (using Barbara’s big bread bowl) substitute for showers. Enjoy those luxuries while you still can.

One or the other of us skied to town about once a week, in and back before dark (usually), to get the week’s mail, a dozen eggs, some fresh greens, and maybe a chicken or pot roast. Occasionally we would all three go to town for an overnighter. To carry Sam, I built a box from scrap lumber that I mounted on the plastic toboggan we used to bring the water jugs from the spring box.

Our friends’ (and our own) worst fears were unrealized; it was a vigorous and occasionally rigorous life, but in a place of deep beauty and quiet magnificence that both embraced and challenged us. I remember the stillness of the valley, which was not quite as calm – we knew the ermine was down in the tunnel under the snow terrorizing the field mice, the coyote would be somewhere stalking the hare. But all was still, the quiet just before.

I remember – must never forget – going out to the outhouse before bed one night, grumping a little to myself at the inconvenience of no indoor toilet, then being kind of gob smacked by the night, stopped by the night on the path to just look at it all. I was for that moment part of a great flower, the mountains rising around us like petals, us just stamens deep in the flower, praying to be dusted by the white fire pollen spread across the sky…. Gothic and the East River valley can confront and comfort simultaneously.

We liked it so much that we stayed for four winters, working the summers between winters as general RMBL staff – enjoying the focused busyness of 150 people engaged in serious science, learning more about the place ourselves just talking to them. But we were also glad as they began to leave in August and early September, and it was our place again, to be buttoned down for the winter, mattresses put in mouse-proof storage, shutters put on upslope windows, et cetera.

We had to leave after our fourth winter. Daughter Sarah had joined us by then – born in the cabin the previous summer, another story in itself. She was still small enough so I could build a longer box for the toboggan, one kid at each end. But that would not have worked for another winter, and we had neither the means nor the desire to “mechanize” with snowmobiles. So we went back to civilization, in about the same marginal economic condition as when we’d left for Gothic, but incredibly enriched by having had the blessing of being there.

I don’t know how many people have had the privilege of being RMBL’s caretaker since then. I do know the caretaker facilities now are not so primitive as ours were – indoor plumbing being a major difference. But from the 50-year perspective, I’m glad we had the bounty that was there. I joke that it “ruined me for civilization” – but fifty years later, I’m even more inclined to say it’s not entirely a joke.