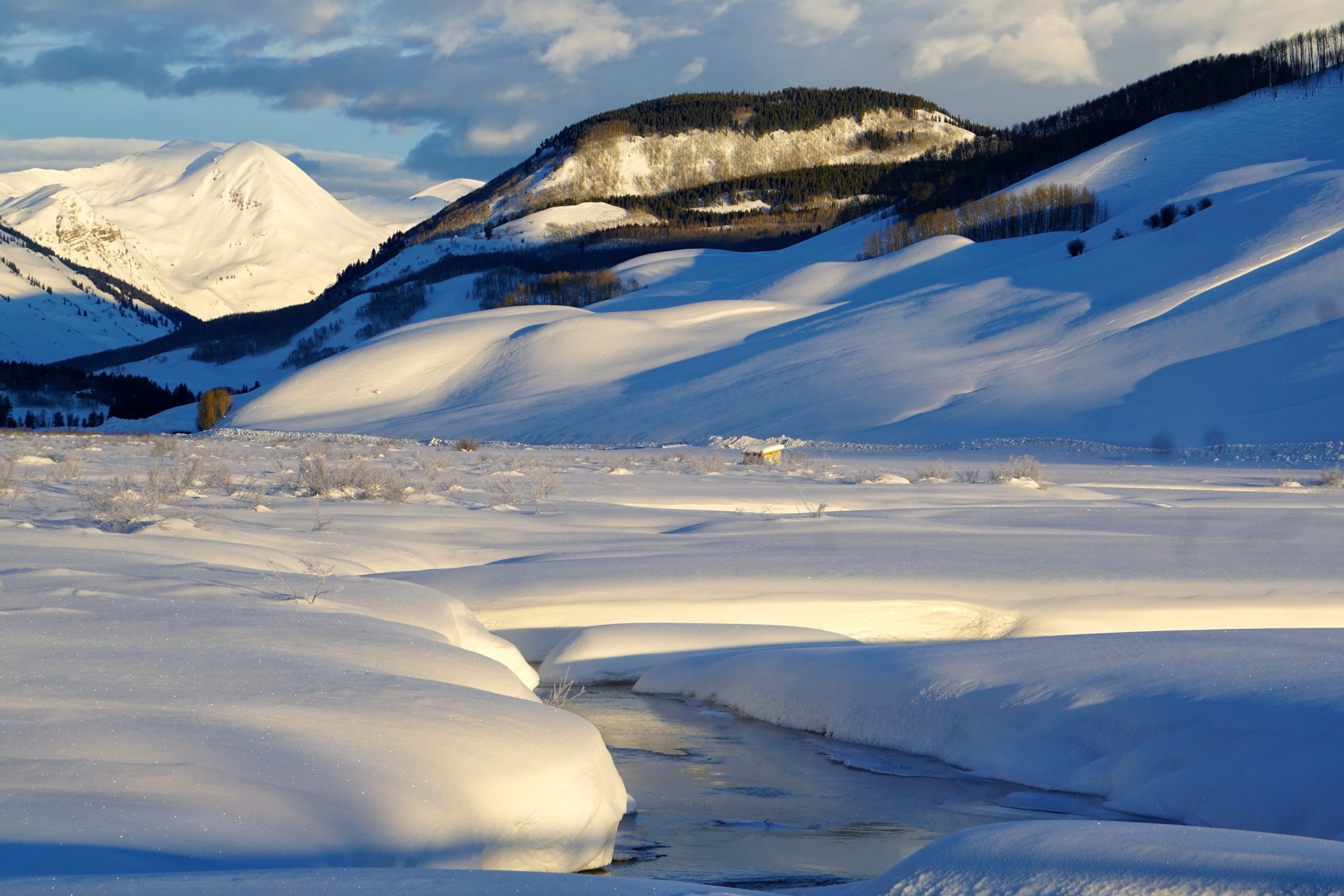 Sixty to 90 percent of the world’s water comes from mountainous watersheds. And 100 percent of them are being affected by climate change. This is what makes environmental research at RMBL so critical. Without water, there’s no life. Without knowing how our water resources are changing, there’s no future.

To get a deeper understanding of how watersheds are responding to environmental changes takes continual study all year long. Most of the scientists who do research at RMBL spend June through August gathering data. They follow the academic calendar because the rest of the year is spent on their day jobs — teaching future scientists at colleges and universities. They bring students with them as research assistants and colleagues. For many of these students, the experience at RMBL launches their career. They often return for subsequent summers. Some even uproot their lives and move here. Amanda Henderson is one of those. She lives in Crested Butte and conducts research at RMBL all year.

Amanda first came to RMBL in 2010 with the NSF program Research Experiences for Undergraduates (REU) while a student at Kenyon College in Ohio. She’s come every summer since. In fall 2017, she became a full-time resident and researcher.

A precocious scientist, Amanda joined a lab at Portland State University while still in high school and got her first taste of field work at the age of sixteen at the Archibald Biological Station. She has since worked at H.J Andrews Forest, Harvard Forest, Niwot Ridge, Coweeta Hydrological Station, Luquillo in Puerto Rico, and Barro Colorado Island in Panama. Something about RMBL compelled her to stay.

Now she’s a full-time researcher on a Lawrence Berkeley National Lab led project called the Watershed Function Scientific Focus Area, funded by the Department of Energy. The research is centered on the East River watershed of Colorado’s Upper Gunnison Basin. It’s one of the many watersheds that drain into a tributary that flows into the Colorado River, which supplies water to 40 million people along with 5.5 million acres of irrigated farmland. Eighty five percent of this water originates in the Rocky Mountains.

The Watershed Function SFA is seeking is to understand and predict how complex interactions (like wildly varied environmental disturbances) lead to a deluge of effects on the water availability, nutrient and metal loads, and carbon cycling of downstream water. They are gaging the impact of a changing climate on the function of the watershed and the entire ecosystem. Already, the researchers have seen the impact of earlier snowmelt on vegetation and the growing season. Being there year-round, Amanda sees it firsthand.

“We are seeing more and more years where plant communities in lower elevation areas of the landscape have access to abundant water for only a short time after snowmelt, and the rate of surface dry down and lack of summer rains can mean parched conditions for meadow vegetation. I and many RMBL colleagues expect this will lead to a shift in these ecosystems toward deeper-rooted species like sagebrush as well as drought-adapted grasses and forbs. However, if plants send roots deeper into the soil in search of water, that could have implications for subsurface dynamics, such as bedrock weathering and fracturing,” she said.

The project brings together a diverse team of biologists, geologists, hydrologists, biogeochemists, and vegetation experts like Amanda. Because of their interdisciplinary collaboration, the scientists can not only observe what happens to vegetation above ground but also track below ground processes to see how the interactions of minerals, soil, microbes, plants, and fluid affect ground water recharge and water flow to streams and rivers. What’s more, the diverse team of scientists can share data, tools, and insights that will make it possible to apply their discoveries in the East River watershed to watersheds around the world.

Ultimately, the goal is to be able to accurately forecast water availability and quality, a huge concern for the western U.S. and a much bigger challenge these days, now that drought, wildfires, floods, and inconsistent snow accumulation and snowmelt dynamics have become the new normal. In just the last three years, the study site has seen both one of the largest snowpacks on record and one of the smallest.

Watersheds are the birthplaces of the water we can’t live without. Amanda Henderson is one of the scientists who will bring us closer to understanding how to predict the future behavior of these vital water sources. She has the particular advantage of living where she works. In addition to being surrounded by stunning landscapes, she can see the big picture. “I understand the system so much more by working here year-round, and I’m able to better notice potentially impactful characteristics of a given climate year,” she said. “A year with lots of late spring snow becomes much more tangible when you have to go out and shovel it.”

Amanda Henderson lives and works in the East River Valley as a field manager for the Watershed Function Scientific Focus Area (SFA). Her work as part of the SFA focuses on meadow ecosystem function in response to different climate drivers including warming, advanced snowmelt, and drought. In her current role, she hopes to act as a bridge between the diverse expertise and capabilities of the SFA and the deep, place-based knowledge of the RMBL community.