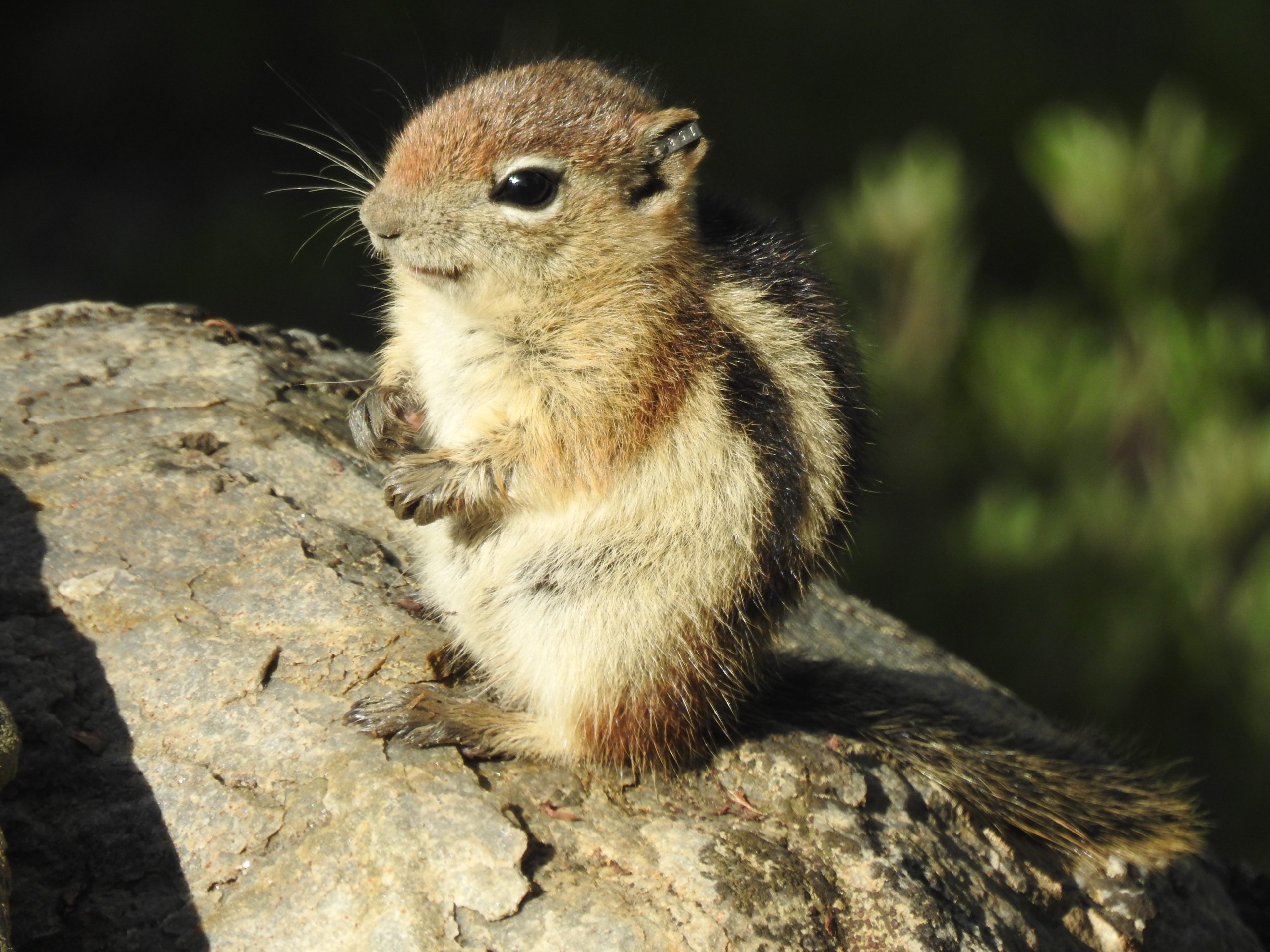 What do the words “wildlife at RMBL” bring to mind? Marmots? Fair enough, but there’s another member of the Tribe Marmotini that RMBL scientists have been studying for over 30 years. It’s the golden-mantled ground squirrel (Callospermophilus lateralis). And it might arguably surpass the marmot on the cuteness scale. But who’s keeping score? We love them both.

In fact, it was Ken Armitage’s 60-year-old study of yellow-bellied marmots that put Dr. Dirk Van Vuren, Dr. Caitlin Wells, and their faithful graduate students hot on the trail of golden-mantled ground squirrels in the first place.

Dirk worked on the Marmot Project with Ken Armitage, and as he was winding down his research, he noticed something about golden-mantled ground squirrels: they’d been neglected. “Most of the research on ground squirrels had focused on the larger species (like marmots) because they’re social, and that’s interesting,” he said. But what if an asocial species could tell us something about social behaviors? That became Dirk’s next project. He studied the role of kinship in social organization, and after about eight years of trapping, tagging, and collecting data, he saw that there had been dramatic variation in the demography, reproduction success, and the sex of the offspring. This led to questions about the effects of climate change on ground squirrels, especially on their reproduction.

Dirk and Caitlin’s paths crossed when she was preparing to work on her dissertation, focusing on how the social environment shapes female reproduction, including the number and sex of offspring, the number of mates, and the timing of reproduction. She had been doing bird conservation but wanted to do a PhD that combined conservation and behavior. Colleagues steered her to University of California, Davis, where Professor Dirk Van Vuren was focused on conservation and animal behavior. He told Caitlin that he knew she had been working with birds, but, “How do you feel about ground squirrels?” Not having worked with mammals, Caitlin was unsure, but Dirk made her an offer: “How about you just try it?”

So she did, spending three weeks at RMBL getting her feet wet. Her eureka moment came the first time she trapped a ground squirrel. Unlike birds that take flight instantly and land a mile away in seconds, ground squirrels practically line up to jump in the traps. “You put a little peanut butter in a trap, and there’s not a rodent on earth that can resist that smell,” she said.

Now Caitlin is in line to take over the research, as Dirk steps into an advisory role. In addition to her interest in the ecological and social factors that influence female reproduction, she’s fascinated with the dramatic variations in the population size. One year, there can be 10 to 12 squirrels; in another, there can be well over 100. The difference between the social environment of an animal born into a small population and that of one born into a baby boom is huge.

One well-known factor in population size is red foxes. When there’s a red fox in town with a litter of hungry kits, she morphs into Godzilla and virtually takes out the whole ground squirrel colony. Some years, she targets marmots, so it’s anybody’s guess which species will face the carnage in a given year.

Caitlin and Dirk have also been studying dispersal, meaning what drives some pups to leave and others to stay where they’re born. Is it competition, food, or something else? For this research, Caitlin is eager to acquire the funds to purchase new GPS devices that will track individuals and help us understand where they go and why.

With more than 30 years of research, the long-term data leave scientists in a good position to use the next three decades to see how the ground squirrels adapt to climate change. It’s a critical question, as their species is vulnerable to the changing environment, and it’s one reason that the data set becomes more valuable every year.

Both Dirk and Caitlin are grateful that the pandemic didn’t bring their research to a screeching halt this summer. It helped that RMBL prioritized helping graduate students come out to Gothic. Counting the students, there were five people tagging this year’s population, which at around 150 animals, was massive.

That in spite of July 4th traffic through Gothic, which killed two mothers (and likely their pups). It seems that if COVID-19 didn’t keep researchers from collecting data, you’d think something could be done about fast drivers who turn valuable research animals into roadkill. What about it, Gunnison County?

Dirk Van Vuren
Dirk Van Vuren is a professor in the Department of Wildlife, Fish, and Conservation Biology at UC Davis. He received his BA from UC Berkeley, his MS from Oregon State University, and his PhD from the University of Kansas. He has been coming to RMBL since 1982, first studying dispersal of yellow-bellied marmots with Ken Armitage, and then studying golden-mantled ground squirrels. He served on the RMBL Board of Trustees, the Facilities Planning Committee, and several other RMBL committees.

Caitlin Wells
Caitlin Wells is a postdoctoral fellow in the Department of Fish, Wildlife, and Conservation Biology at Colorado State University, working on the evolution of ground squirrel life histories. She also collaborates with UC Davis investigating maternal investment and conspecific brood parasitism in wood ducks, and with the University of Oregon using whole genome sequencing to understand the recent extinction of a suspected hybrid species of African primate, and non-invasive genomic methods to study the sociality and demography of forest and forestXsavanna hybrid elephants in Western Uganda.