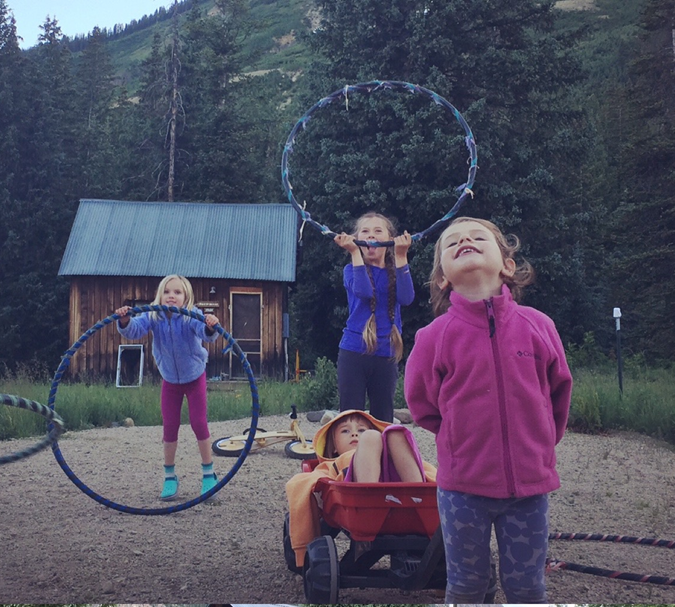 Does RMBL produce better science because it’s family friendly? It wouldn’t be a stretch to make that claim. Time and again, scientists say that one of the best ways RMBL supports them, especially those that return year after year to work on long-term studies, is by welcoming their families. For decades, RMBL has understood that scientists, like other humans, fall in love, get married, and have kids — and yet want to keep doing science.

One scientist couple who’ve been coming to RMBL since 2010 are adamant about the scientific value of RMBL’s familial culture. They are Drs. Berry Brosi and Karen Levy, both associate professors at the University of Washington.

Dr. Berry Brosi is an ecologist whose research primarily centers on plant-pollinator interactions and networks, in other words, which pollinator species visit which plant species. He’s a big picture investigator. Rather than look at a few plant and pollinator species, he follows the structure and stability of the whole community.

Speaking of community, it was the group of scientists already working here that first attracted Berry to RMBL. Being among researchers who knew so much about the history and biology of the plant and pollinator systems made Berry’s research a natural fit.

Investigating plants and pollinators at the community level brings up plenty of questions. Berry’s team delves into not just who visits whom but also how much they’re visiting. They search for patterns in the pollinator-plant networks. One of his graduate students is even looking at how these networks change over space. It seems that some plants and pollinators will interact in one place but ignore each other in another. Scientists want to know why.

The team is also doing climate-related research such as the effects of drought on these networks as well as the consequences of accelerated snowmelt. One such effect is a timing mismatch between early blooming plants and pollinators that arrive at the usual time, only to be too late.

Dr. Karen Levy is an infectious disease epidemiologist and microbiologist who teaches at the University of Washington’s School of Public Health. She studies food- and waterborne diseases. Her field work takes her to places like Ecuador and Mozambique, but she’s equally at home at RMBL, where she works remotely. The couple’s two daughters attend RMBL’s nature and science camps and reconnect with other scientists’ kids who return every summer. Their oldest daughter, Aviva, has spent every birthday at RMBL except for last year, when Berry and Karen moved their careers (and their family) from Atlanta, where they taught at Emory University, to Seattle and the University of Washington.

With a PhD in environmental sciences, Karen says that her strong background in ecology as well as her interactions with RMBL colleagues help inform her thinking. “Infectious diseases are very much driven by environmental conditions,” she says. “I’m interested in the impacts of environmental change and environmental determinants of these diseases.”

One of her current studies is the gut microbiome. “I see it in very different ways than my health colleagues because I have an ecological perspective … thinking about the gut as an ecological community,” she says. She’s also looking at whether diverse communities of microbes in the gut confer resilience to infections.

With the advent of Covid, her work couldn’t be timelier. In addition to studying the impacts of travel on the spread of infectious diseases, she looks at why some people are symptomatic and others are not — all relevant for the Covid era.

Both Berry and Karen emphasize how important RMBL support is to their work and their family. Berry says, “One of the most valuable contributions of RMBL has been the long-term data sets that have been put together over many decades by scientists returning to this place — and they’re able to do it because they can bring their families. There’s something very special about that.”

Berry J. Brosi is an Associate Professor in the Department of Biology, University of Washington. He is a community ecologist whose research program is focused on how both biodiversity and the structure of ecological interaction networks affect ecological stability and functioning, using both theoretical and empirical approaches. His empirical work has primarily used plant-pollinator interactions and networks as a model system. He has worked at RMBL since 2010. He earned a Bachelor of Arts degree from Wesleyan University, a Master of Environmental Science degree from Yale University, and a PhD in Biology from Stanford University.

Karen Levy, PhD, MPH, is an Associate Professor in the Department of Environmental and Occupational Health Sciences at University of Washington’s School of Public Health. She studies environmental determinants of infectious diseases, specifically focusing on the ecology and epidemiology of enteric (food- and waterborne) diseases. Her group uses environmental microbiology and environmental epidemiology methods to study water quality, food safety, interactions between the gut microbiome and enteric diseases, and the impact of climate and land use change on the transmission of diarrheal diseases. She loves that her daughters have grown up spending their summers at RMBL.