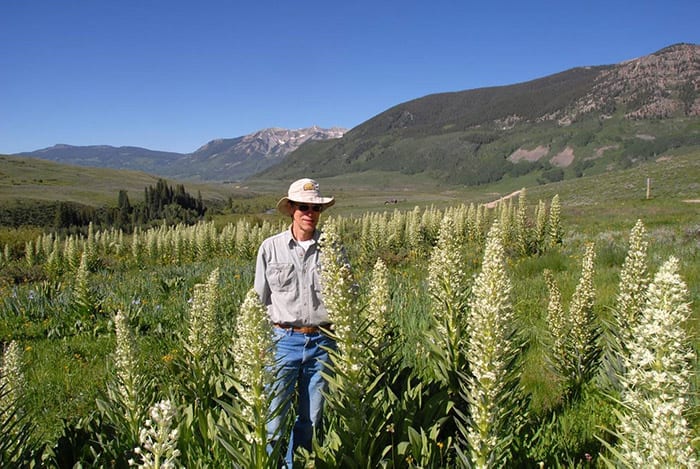 Dr. David Inouye first came to RMBL in 1971 and started his Ph.D. research there in 1972. “I was a graduate student studying hummingbirds and bumble bees, and I wanted to know what flower nectar resources are available for them, so I started counting flowers,” he said. And he kept counting, year after year. Now, after 49 years, the data set he and fellow researchers have amassed is one of the longest and most comprehensive on record.

Furthermore, the data set not only documents when wildflowers bloom but also how many of them bloom in any given year. That knowledge is useful when you’re trying to understand what makes them flower in the first place.

Here’s where the length of these studies have yielded interesting insights. One of the plants Dr. Inouye has studied is Frasera speciosa, also known as the monument plant. This giant, which grows up to nine feet tall, can live 80 to 100 years, but it flowers only once. Then it dies. If you walk through the meadows around RMBL, you’ll see thousands this year. Dr. Inouye has counted up to 18,000 in one year. Compare that to last year, when he spotted just nine across his observation area, stretching from the Gothic Road trailhead in Mt. Crested Butte to Emerald Lake.

Why the dramatic difference in flower abundance? Dr. Inouye thinks it may have something to do with what happened four years ago. That’s how long it takes Frasera to make a stalk. Researchers believe that wet summers trigger stalk production underground. Coincidentally, the summer of 2015 was one of those, hence the riot of blooms flooding the meadows this season.

Observations like this don’t happen without long-term studies. “It takes a very long time to figure things like this out,” Dr. Inouye said. This particular observation took around 30 years to accumulate enough good flowering years for statistical analyses.

Something else Dr. Inouye wants to know is at what age the plant flowers. To learn that, he planted Frasera seeds in 1982 at RMBL. The first one to flower was a six-foot, 20-year-old. Nineteen more have since flowered, and it appears that the remaining plants, which are 36 years old, will flower this year.

Dr. Inouye’s team is also observing a few thousand Frasera plants growing at 12,300 feet near Cumberland Pass, a study that began in 1973. Some of those plants are now at least 46 years old, and they haven’t flowered yet. Stay tuned.

The value of these studies will only increase with time. As Dr. Inouye says, “You can learn great things by keeping the study going.” That’s what researchers hope to do as they approach the end of a 10-year grant from the National Science Foundation (NSF) with high expectations of having it renewed.

In the meantime, Dr. Inouye has cultivated a flowering of scientific curiosity in his own family. He was first exposed to Gothic when his father was a volunteer physician there in the 1970s. Thanks to RMBL’s family-friendly culture, his son Brian spent his summers growing up around Gothic. Now Brian and his wife, biologist Nora Underwood, both of Florida State University, are part of the team of investigators in The RMBL Phenology Project, funded by the NSF. And the couple’s daughter is a regular at RMBL’s summer science camps. A fourth-generation scientist could be budding as we speak. To learn more about the RMBL Phenology Project, explore this link.

David Inouye is Professor Emeritus at the Department of Biology, University of Maryland, College Park, and Principal Investigator at the Rocky Mountain Biological Laboratory. David does research in botany, ecology and zoology. A current project is the long-term study of the phenology and abundance of flowering at RMBL and how that affects pollinators and seed predators.