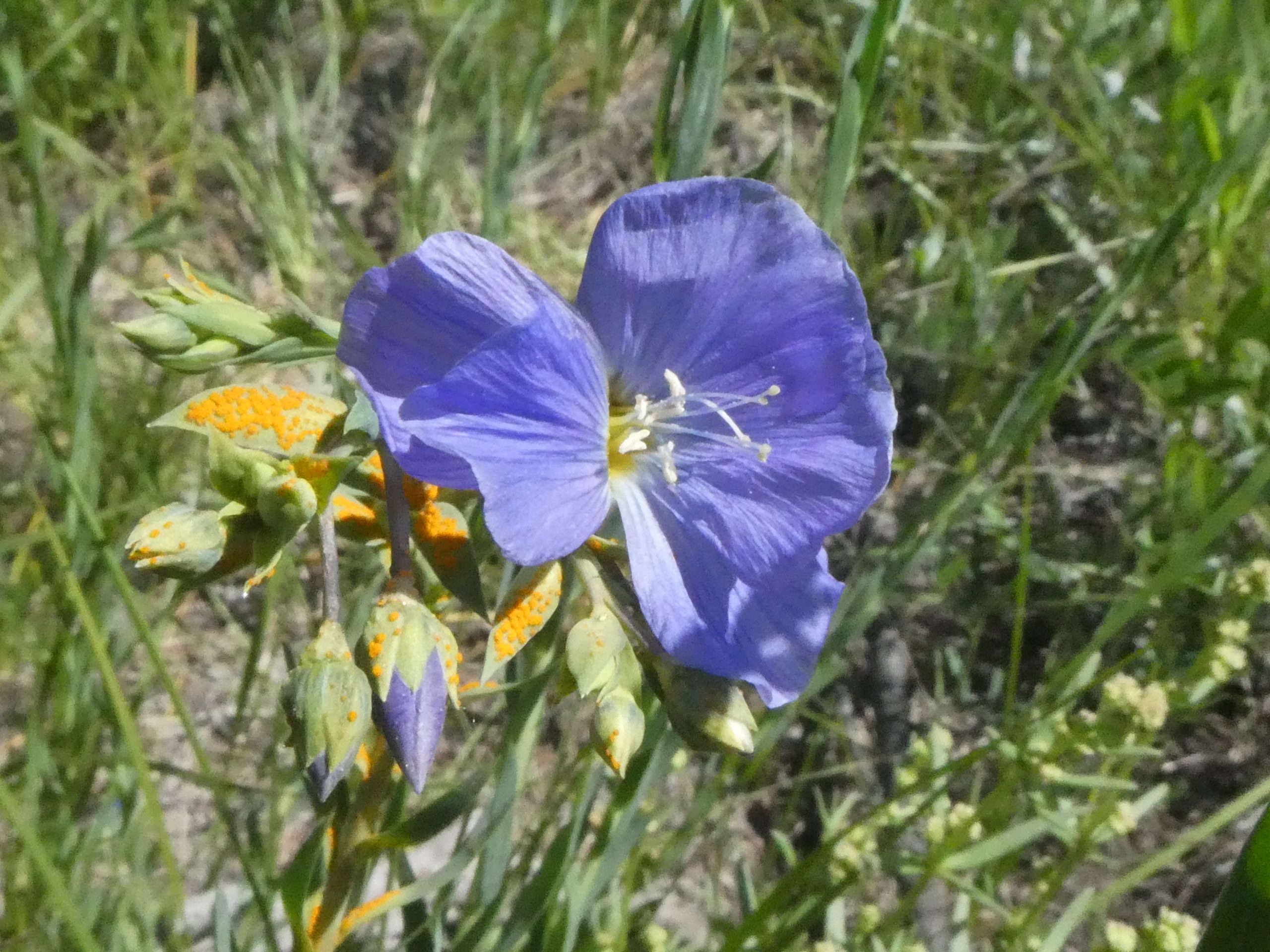 Ian Miller is one of the scientists on the front lines. He’s a PhD candidate at the Metcalf lab at Princeton University, and he’s studying a particular plant native to the Rocky Mountains, Lewis flax (Linum lewisii) and its enemy, a fungus called flax rust (Melampsora lini).

Conducting his research at RMBL not only offers Ian plenty of flax plants but also provides a proxy for climate change, given the natural gradient of temperature and humidity that exists along the mountainous slope where the flax grows.

In addition to being the source of flax seeds, linseed oil, and linen, flax offers a useful model for understanding plant pathogens like flax rust, which has been widely studied for years. “It’s the lab rat of plant pathogens,” said Ian.

Nicknamed Cheetos dust by one of Ian’s colleagues, the bright orange fungus produces spores that travel and infect other plants aggressively. To put it in simplest terms, Ian’s research focuses on two questions. First, how is climate change affecting the epidemiology of plant pathogens, in other words, the way they spread? Second, how is climate change affecting the evolution of plant pathogens, or their infectiousness and aggressiveness?

The research has already yielded interesting observations. Ian’s team was surprised at the variety of the rates of infection they found among plants in different sites. In one of the densest sites they had, the plants were totally wiped out by the end of the season. But other sites had only half as much damage. Could that indicate that there was a marker of some genetic resistance? If so, it was striking how the genetic resistance and immune systems varied among sites. If scientists could figure out what made the difference, we could leverage that knowledge to protect crops and secure food sources.

Given the disruption to field science caused by the coronavirus, Ian feels fortunate to be at RMBL this summer. He said that it took months of work to make sure he could come. Even then, he and other researchers at Princeton were pulled off of their ongoing research projects to focus on COVID-19. Among other things, Ian has provided scientific data about the coronavirus to state governors’ offices to inform their policy decisions.

He empathizes with colleagues whose work has been stalled by the pandemic. But he says that if there is a silver lining to be seen, it is the admirable way that scientists have volunteered to contribute their time to COVID research. “A lot of people dropped everything to do that,” he said. It’s been very inspiring to see.”

Ian Miller is a PhD candidate with Jess Metcalf at Princeton University. He is broadly interested in the evolutionary and ecological processes that shape host-pathogen interactions in systems ranging from humans to alpine wildflowers. At RMBL, he studies flax and its fungal rust pathogen to investigate how climate change might affect the epidemiology and evolution of plant pathogens. By bringing ideas and modeling methods from human infectious disease biology across the taxonomic divide to the plant world, he hopes to generate a better understanding of how plant pathogens will spread and evolve in a changing world. In addition to science, Ian enjoys traveling, hiking, running, climbing, and any adventure that takes him outside or to a new place.