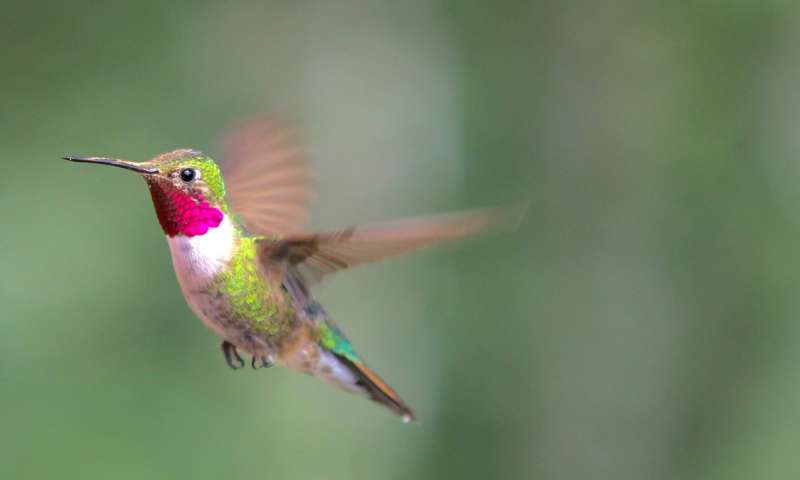 Birds do it with astonishing aerial speed

What’s it like to watch a tiny male hummingbird soar to about 100 feet in the air and dive at breakneck speed towards the Earth while snapping its tail feathers and flashing its iridescent throat patch in a breathtaking display of lust? Or, more to the point, what’s it like for a female hummingbird? Ask Dr. Cassie Stoddard.

Since 2016, Dr. Stoddard, her postdoctoral research associate Dr. Benedict Hogan, and Princeton students have been observing these showy daredevils at RMBL. What the fearless male broad-tailed hummingbirds (Selasphorus platycercus) do to impress the ladies is especially fascinating to scientists. But Dr. Stoddard’s team is doing more than observing the birds. They are trying to discern exactly how these creatures perform their multimodal courtship display – a thrilling show of speed, sound, and color – simultaneously. No other scientists have described the synchronization of these displays.

To do that, they mount video cameras on tripods where the males and their prospective girlfriends hang out. The researchers then combine the audio and video recordings with image-tracking software to achieve a richer understanding of the birds’ behavior and to understand how these seductive dives look and sound to the females. The software helps researchers measure the male’s speed and trajectory during the dive and the precise time at which he snaps his tail feathers and flashes his iridescent throat.

To learn more about the iridescent plumage component, the team went to the American Museum of Natural History in New York City and photographed hummingbird specimens using a special UV-sensitive camera. Hummingbird eyes have four color cones (humans have just three), one of which is ultraviolet-sensitive. When researchers combine the images with a model of the bird’s color vision, they can approximate the female’s point of view. Amazingly, the researchers have discovered that the speed, sound, and color change is a nearly simultaneous climax that occurs the instant before the male buzzes past the female. “These aerial acrobats deliver an in-your-face sensory explosion,” said Stoddard. Surely no human has mastered a pick-up line with as much panache.

Broad-tailed hummingbirds are special to RMBL researchers. Living in Mexico and spending their summers breeding and raising young in the Colorado Rockies, they’re also highly susceptible to climate change. Dr. Stoddard’s team wants to understand how these birds will adapt to a warming climate. This makes RMBL scientist David Inouye’s 40-year data set of flower bloom times especially valuable. Dr. Inouye’s studies have revealed that as the Earth warms, the flowers at RMBL are blooming much earlier, which means these hummingbirds could be arriving too late to pollinate and forage from their favorite flowers. How will this change their breeding and nesting behavior?

If any scientists are equipped to answer that question, it’s likely Dr. Stoddard’s team. Their research combines computer science, math, optics, physiology, animal behavior, mechanical engineering, and comparative genomics. It also benefits from the collaborative culture of RMBL, which helps inspire and nurture future scientists. “It’s so exciting to take students there,” said Stoddard. “They come alive. Some will pursue a career in science because of it.”
Incidentally, Dr. Stoddard herself was inspired as a child to study birds by watching her mother and grandmother birding. Their love of birds fostered the career of an important avian scientist. Their passion gave her wings.

Mary Caswell Stoddard (Cassie) is an Assistant Professor of Ecology and Evolutionary Biology at Princeton University, where she is an associated faculty member in the Princeton Environmental Institute. She received her undergraduate degree from Yale University, where she researched avian vision and plumage color evolution. She earned her PhD at the University of Cambridge, where she was a Marshall Scholar. Prior to Princeton, Stoddard was a Junior Fellow in the Harvard Society of Fellows. She is a 2018 Alfred P. Sloan Research Fellow and a 2018 Packard Fellow.