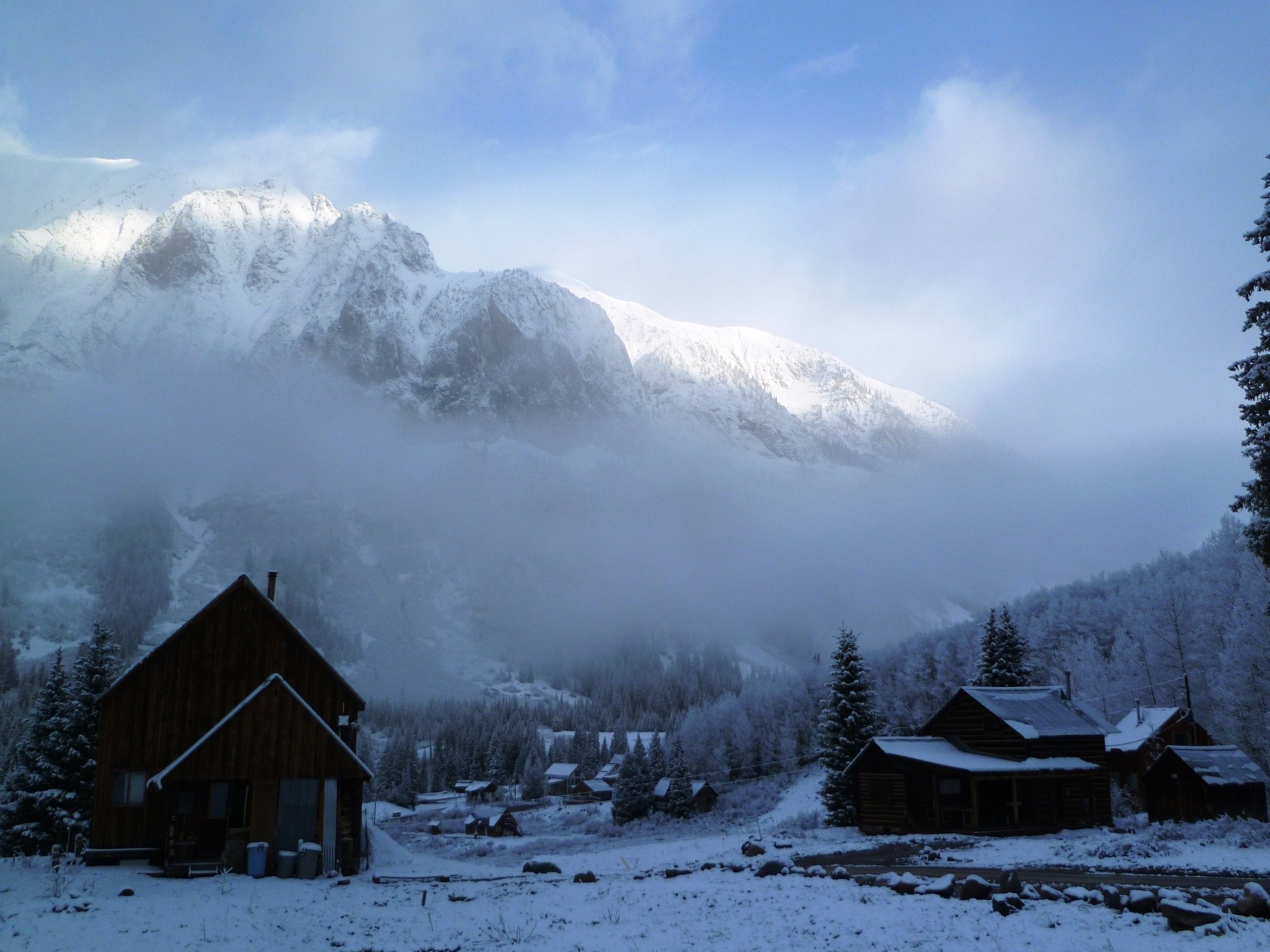 In a normal year, RMBL scientists return to their universities at the end of summer and, except for the fall youth program, things get quiet around here. But Gothic doesn’t go into hibernation. While everyone else is back home, there are a few hardy souls who stay in Gothic through the long, snowy winter.

They clean and manage the Nordic ski huts used for winter rentals. They shovel snow off the dining hall roof. They take care of all the ongoing maintenance that keeps RMBL functional. One of those caretakers is Rachel Dickson, a graduate of the University of Montana, who has spent the last three summers at RMBL. She began as a student in the undergraduate program and then worked as a research assistant for the next two seasons. This past winter was her first as a caretaker. The snowpack was below average, so she adjusted quickly. It was only when spring and a global pandemic arrived that things got weird.

Fortunately, Rachel’s education in environmental science and her own unquenchable thirst for knowledge have made her a valuable asset for scientists whose seasonal research has been stalled due to COVID-19. Rachel has been doing what she can to keep them in the loop. “I’m sure my friends [scientists] who are trapped in the city have appreciated getting pictures of flowers or animals they’re studying,” she said. Being able to experience springtime in Gothic has been a bonus.

“I’ve absolutely loved being here this spring,” she said. “It was my first time witnessing all the snow melting and seeing everything come out. But it’s been strange not having other scientists up here enjoying that.”

Actually, Rachel does science all year. While she’s doing winter maintenance, she also collects data for the area’s weather station and digs snow pits to collect data for NASA’s SnowEx project, which is measuring the amount of water in the snow (the Snow Water Equivalent) in forested areas throughout the western U.S. She also does additional tests on the snowpack for the Colorado Avalanche Information Center.

On top of that, she’s been doing lab work left over from last summer. For that, she could hardly be better situated. Last summer, Rachel started working on the long-term Bee Phenology Project, assisting Principal Investigator Dr. Rebecca Irwin, associate professor at North Carolina State University. This project monitors bee diversity and abundance across an elevational gradient with the goal to understand how climate change is affecting bee pollinators, flowering plants, and the interactions between them.

Gothic has a rich diversity of bees and flowering plants, and with this project’s sites spanning from 2,496 meters to 3,428 meters (8,188 to 12,631 feet), that diversity becomes richer still. What’s more, the proximity of some of the project’s sites to those of David Inouye’s long-term flowering phenology research, begun in 1973, means that the data collected for Dr. Irwin’s research can be incorporated into Dr. Inouye’s long-term data set. In fact, that’s what has happened since 2009, when the bee phenology project was added to the long-term flowering study. Considering that 90% of flowering plants rely on insects or other animals for pollination, and humans rely on the billions of dollars’ worth of crop pollination they provide, collaborative science such as this is more vital than ever.

Rachel’s always been interested in insects and flowers. Having worked with bumble bees in Argentina and with honey bees in Kenya, she doesn’t mind combing the globe to study them. But what she most enjoys about the bee phenology project is doing plant identification and bee identification at the same time. “I really love both,” she said.

Then there’s her other love — teaching, which is another benefit of working at RMBL. She mentored three undergraduate students last summer and will do so again this summer, both locally and remotely. She’s also worked with the RMBL fall field program for local school students the past three years. She added, “I really look forward to the fall because I can take what I’ve learned and teach it to eager kids. That’s really fun.” Ultimately, Rachel wants to work in sustainable agriculture and hopes that we can use our knowledge of plants and pollinators to maximize crop yields.

When she isn’t in the field, she’s spending as much time outdoors as possible, hiking, mountain biking, or back country skiing. Inside, she doesn’t sit around. She plays the piano. She does crafts, mostly crocheting. And lately she’s tried her hand at fermenting. “I was planning on doing a lot of painting and writing over the winter, but it’s surprising how little time I had,” she said.

As weather permits, you can find Rachel taking care of business at RMBL: collecting data on bees and flowers, marveling at the diversity of wildflowers in the study sites, perhaps watching the summer yield a huge flowering of monument plants (Frasera speciosa) and an equally impressive surge in the bumblebee population. Then when the season changes, she’ll prepare for another winter of maintaining RMBL buildings, shoveling snow from rooftops, and digging up scientific knowledge everywhere she turns.

Rachel Dickson grew up exploring the rivers and mountains of Missoula Montana. She has always loved any adventure that gets her outside seeing new places — skiing, biking, floating the river and climbing mountains being some of her favorite things. She also enjoys world travel, writing, playing piano, painting, gardening, fermenting, and baking. She has been doing plant and pollinator research for nine years and has worked on projects in Montana, Colorado, Argentina, and Kenya. She graduated from the University of Montana in 2018 with degrees in Environmental Studies and Ecology.  She is currently one of the two full time residents of Gothic, Colorado, where she works as a research assistant during the summer and a winter caretaker during the winter.