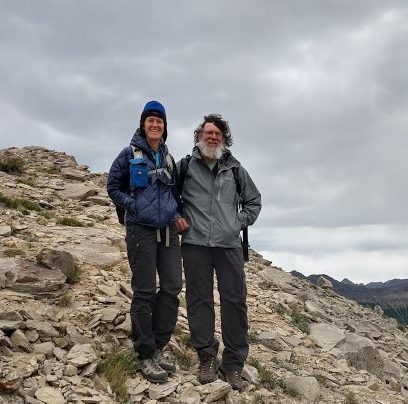 It’s hard not to admire burying beetles. They fly around, lured by the aroma of a small mammal’s fresh carcass (which they can smell from far away). When they find a carcass, they meet a date, hook up, and start preparing the carcass to feed their growing family. It’s quite a ritual. They strip off the animal’s hair, roll the body into a ball, and neatly bury it next to their eggs. The body feeds parents and larva until the kids leave home.

Beetles make up a fourth of all known life on Earth, and there are over 350,000 species of them, so their unusual reproductive habits are working well. Dr. Rosemary Smith got hooked on burying beetles when she was teaching a summer class about animal behavior at RMBL. The students were looking at how animals choose their nesting sites. After having read an article about the beetles, Dr. Smith decided to have her students set out rodent carcasses in three different habitats to see what would happen. That’s how they first observed the beetle’s fascinating mating behavior. Later, when she began a faculty position at Nebraska Wesleyan University, she met Dr. Brett Radcliffe, a museum entomology curator and renowned expert on burying beetles. He suggested that she look into other aspects of the beetles like competition and carcass preferences. Her fate was sealed.

As an ecologist, Dr. Smith is interested in animal abundance and distribution. She realized early on that studying beetle abundance would require understanding small rodent populations. Thus began her decades-long population study that relates the biomass of small rodents to beetle populations. In addition, she’s explored everything from temperature regulation to parental care behavior, she’s looked at how rodent and beetle populations have changed over time, and she’s collaborating with the RMBL Phenology Project to correlate the spring emergence dates of adult beetles to snowmelt.

Dr. Smith first came to RMBL in 1983 as an undergraduate, and she completed both her master’s degree and PhD here. “I’ve spent my whole adult life at RMBL,” she said.

In the summer of 1991, she was climbing Mount Baldy. At the summit, she ran into another scientist equally passionate about climbing the mountains around Gothic: Dr. Rick Williams. He had first come to RMBL in 1977 as an undergraduate, had earned his master’s degree and PhD elsewhere, and returned to RMBL to do an NSF postdoctoral fellowship with Drs. Nick Waser and Mary Price. At the end of summer, the two went to their respective positions, Dr. Smith at Nebraska Wesleyan and Dr. Williams at University of California–Riverside. But the relationship persisted, and in 1997 they got married at the Kettle Ponds just down the road from RMBL. The day after their wedding, they invited their guests to climb Mount Baldy with them. They’ve been climbing it on every anniversary since.

In 1999 they both moved to faculty positions at Idaho State University in Pocatello. Being a two-scientist family has its advantages. They not only assist each other in the field but also broaden each other’s interests. “I’ve learned all my plants!” said Dr. Smith. Dr. Williams is a botanist at Idaho State University and curator emeritus of the herbarium at the Idaho Museum of Natural History. Since 2012, he also has curated the herbarium and natural history collections of RMBL.

The herbarium is a collection of the dried, pressed plant specimens collected over the entire history of RMBL since the 1920s. It’s an irreplaceable historic record of the region’s plant distributions and ecology, containing the world’s most comprehensive collection of specimens from the Gunnison Valley.

Over the last few years, Dr. Williams has digitized the RMBL herbarium’s 8,000+ plant specimens and made these collections available online. All of these species are georeferenced, imaged in high resolution, and verified for accuracy. Accessible and searchable, the specimens are an invaluable resource for research and education. Dr. Williams and his students are using these records to survey and track vegetation changes over time at a series of well-collected sites spanning sagebrush to high alpine elevations. In particular, they are resurveying sites that were collected by Harriet Barclay between 1929 and 1978 as well as sites surveyed by Jean Langenheim from 1948 to 1951.

Dr. Williams’ research has already revealed dramatic changes in the resurveyed species. They have moved roughly 50 meters higher in elevation, and the entire composition of plant communities has changed. Likewise, Dr. Smith has noticed changes in insect populations, including the surprising appearance of a species more commonly found in lower elevation sagebrush communities. Current research focuses on determining whether changes in seed production have affected the number of rodents and in turn the number of beetles.

Drs. Smith and Williams have retired from their faculty positions, but they haven’t curbed their enthusiasm for RMBL. Their research continues, and both have supported RMBL in many ways — mentoring students, helping with tours, working with the summer research program, and more. For the past several years, the couple have been active Marmot Club members, donating their own funds and matching others’ gifts to encourage more donor participation. “I believe it helps RMBL to have the support of scientists,” said Dr. Smith. “It’s really worthwhile to put time and money into RMBL. It’s a place that gives back.”

Rosemary Smith, PhD, is Professor Emeritus of Ecology and Science Education at Idaho State University. Dr. Smith has always combined research and education, teaching field courses at RMBL while conducting her field research and mentoring over 100 undergraduate and graduate students. Her research interests are behavioral ecology and science education. Currently, her biological research focuses on the behavior, ecology, and evolution of burying beetles, particularly population dynamics and reproductive strategies.

Charles F. Rick Williams, PhD, is Associate Professor Emeritus in the Department of Biological Sciences at Idaho State University, Curator Emeritus at the Ray J. Davis Herbarium at Idaho Museum of Natural History, and Curator of the Herbarium and Natural History Collections of the Rocky Mountain Biological Laboratory. His broad interests in ecology and evolutionary biology range from the effects of climate change on plant communities to population genetics of seed dispersal, pollination biology, and plant and animal mating systems.