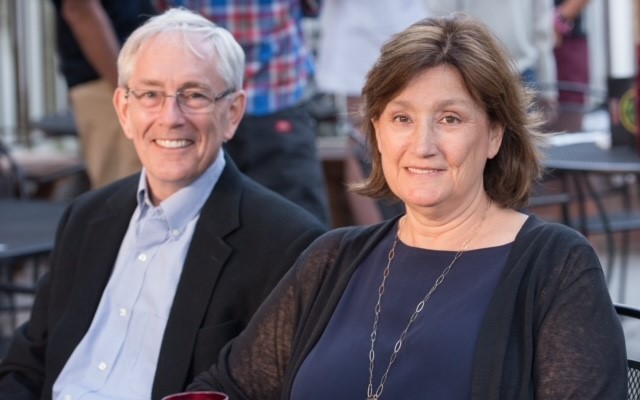 The year 2013 was an auspicious one both for RMBL and for some new residents of Crested Butte. Jim and Doris Brogan had just purchased a second home in the Skyland subdivision and with their children — Daniel, Elizabeth, and Mairead — were looking forward to dividing their time between their new home near the Slate River and their home in Philadelphia, Pennsylvania, where Doris is a law professor at Villanova University and Jim is a partner in the law firm DLA Piper.

Even as newcomers, the Brogans already knew one of their neighbors, a colleague at Jim’s law firm. It was that neighbor who introduced the couple to Ian Billick and Jennifer Reithel, RMBL’s executive director and science director, respectively. The Brogans were immediately impressed with Ian and Jennie and their description of RMBL. Within a year, they became major donors.

Doris explains, “I thought the research they were doing was so important.” But it wasn’t for research alone that RMBL struck a philanthropic chord in the Brogans. “RMBL brings in some of the greatest scientists from all over the world, but it also brings in students of all economic capacities, opening up science to the next generation,” she said.

The Brogans have continued their support of RMBL and in fact have increased their level of giving several times. Now they are among RMBL’s most generous donors. Over the years, the more they have learned about RMBL’s contribution to science, the more they’ve been compelled to contribute to science in their own way — by supporting RMBL.

“Education has been our focus,” said Jim. “We appreciated RMBL’s emphasis on learning and the egalitarian provision of opportunities for students.” He said that over time, “We also more fully understood the quality of the leadership and how carefully the contributions are directed.”

Their daughter Mairead, a senior at the University of Colorado Boulder, has personal reasons for backing up her parents’ assessment of RMBL. In the summer of 2018, she asked to serve as a volunteer scientist. Having always been interested in environmental science, she wanted to be closer to the pioneers in the field. At the time, Doris joked that they would have been happy if her only assignment was to wash petri dishes — anything to expose her to more science. “It ended up being a lot more than that,” Mairead said.

As a high school senior, Mairead started working with Dr. Bobbi Peckarsky, a professor emeritus at Cornell University and honorary fellow and adjunct professor at the University of Wisconsin Madison. Her 46-year-long research on the streams around RMBL has launched countless scientific inquiries and careers.

Once Mairead started working alongside Bobbi, she began to see herself as a scientist for the first time. “She was an incredible mentor,” Mairead said, “and she made me feel like I was as important to the decision-making as she was.”

After four summers at RMBL, Mairead, now a college senior, is writing an honors thesis based on some of the work she did there. Her thesis is focused on what researchers call a nuisance diatom, Didymosphenia geminata, or didymo for short. Although not an invasive species, it acts like one, blooming despite the limited nutrients in RMBL’s high-altitude streams. Researchers want to understand why didymo exhibits these blooms and how it affects the communities of invertebrate species (like mayflies) that depend on the streams.

That students like Mairead can interact with globally influential scientists like Bobbi Peckarsky is one reason why the Brogans have remained steadfast RMBL supporters. Doris never ceases to be impressed by the student-scientist connections RMBL fosters. “You’ll be at a table at dinner, and the students are having conversations with people who are on their way to winning Nobel prizes. It’s extraordinary,” she said.

RMBL’s sense of community — that we’re all in this together — is a large part of its powerful attraction for scientists, students, and donors alike. Jim says that his confidence in RMBL’s leadership, how well the lab is run, and the direction it’s moving assures him and Doris that their investment is a good one.

For her part, Doris sees that RMBL has a clear, ambitious vision for a meaningful future and a solid plan to get there. “RMBL’s future is bright, and we are thrilled to be part of that,” she said.

Mairead Brogan is a student at the University of Colorado Boulder, where she is pursuing a degree in Ecology and Evolutionary Biology. She has spent the past four summers at RMBL working on long-term biomonitoring of streams with Dr. Bobbi Peckarsky. She is currently working on an honors thesis in this area of research. Mairead is also passionate about the intersection of science and communication and is currently serving as the editor-in-chief of the CU Independent, the University’s leading source of student news.