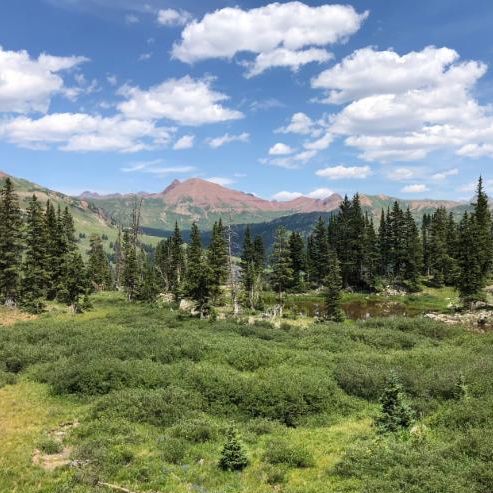 There’s a place near Gothic that is one of the best kept secrets among RMBL field scientists. It’s the Mexican Cut Preserve. A cirque (bowl-shaped basin) on the side of a mountain, it was originally a site explored for gold and silver and later abandoned. Since then, it has remained a virtually undisturbed blanket of native plants dotted with ponds. As a resource for studying intact ecosystems, its value to science far outweighs any precious metal.

That the Mexican Cut Preserve remains untouched and preserved for research and education is the fortunate result of the tenacity of Dr. Scottie Willey. She and her husband Dr. Robert Willey first came to RMBL in 1958 on the advice of faculty members from Harvard University, where both had just earned their PhD degrees. Eager to put their education to work, they found RMBL to be a scientific gold mine.

The Western Colorado region itself was ideal for both Robert’s research on grasshoppers and Scottie’s research on aquatic insects. Then when the couple discovered the Mexican Cut with its abundance of ponds, Scottie immediately recognized its great research potential. Once Scottie and Robert began their research projects, RMBL became the Willey’s summer home and research base until their retirement in 1996.

From the beginning of their careers, the Willeys developed a strong attachment, both scientific and emotional, to the Mexican Cut and naturally became concerned about protecting it for science. Through patience, determination, and skillful negotiation, they helped convince The Nature Conservancy to purchase the land. The nonprofit then designated RMBL as the caretaking institution. In turn, RMBL found donors to repay the purchase cost to The Nature Conservancy.

With the ponds being essential to Scottie’s research, she grew concerned about the need to protect the water in the ponds and the aquatic communities that depended on it. At the time, water rights were only granted to those who planned to consume the water, which meant draining the ponds and thus ruining the ecosystems. Robert, Scottie, and a sympathetic attorney crafted the state’s first application for non-consumptive water rights, which were granted. The water in the ponds would remain where nature intended.

It was a significant victory for aquatic biology. But just as the Willeys began celebrating their achievement, a friend rushed to their cabin with news that a bulldozer was making its way up the trail to the Mexican Cut. Scottie jumped in their VW van and quickly made it to the scene. After parking behind the bulldozer, she scrambled up a steep bank, went through the woods to get past the bulldozer, and dropped down in front of it, motioning to the driver.

The puzzled operator stopped and allowed Scottie to climb into the cab, where she breathlessly explained that the land was protected. Without any argument, the driver calmly turned around and headed down the mountain. A gate blocks the road now.

To this day, Scottie wishes she had gotten the driver’s name so she could thank him for not contributing to the destruction of a pristine plot of land with undisturbed aquatic communities. In fact, it’s the pristine nature of the Mexican Cut Preserve that makes it so important to RMBL’s contributions to biological science today. We will always be grateful to Scottie Willey for keeping it that way.