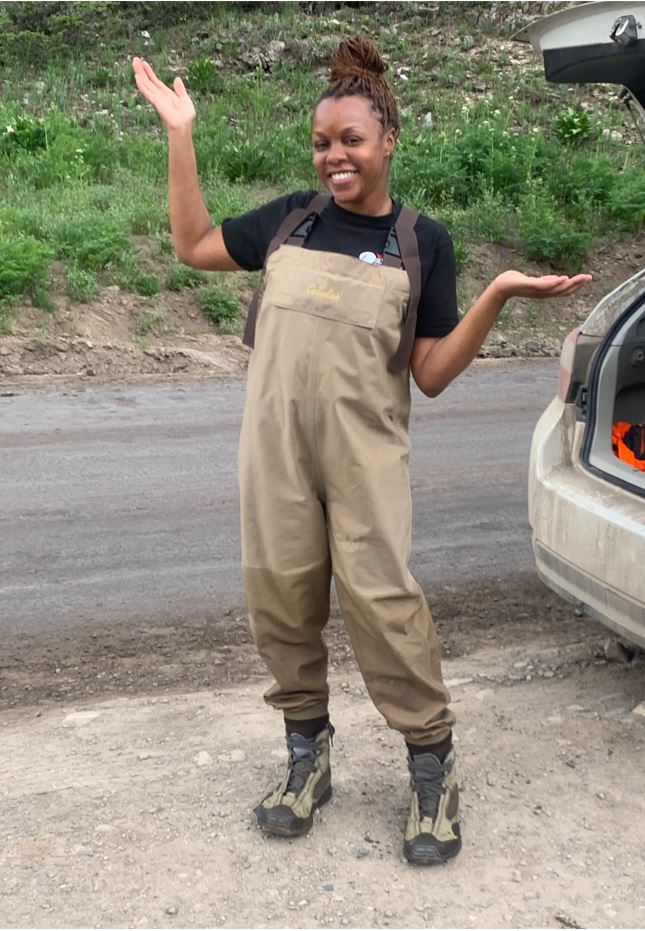 It’s interesting how a scientist’s research trajectory can change over a summer. One minute you’re all about the deep blue sea, and the next minute you’re overturning river rocks to find insects.

That’s one of the cool things about science. You never know where it may lead you, both geographically and intellectually. Brittney Cleveland is a graduate of California State University, Dominguez Hills, and a native of Los Angeles. She has spent her last two summers at RMBL. In 2020, her research at RMBL was funded through the National Science Foundation’s REU (Research Experience for Undergraduates) program. In 2021, she was awarded the Ryan Brown Fellowship, a RMBL fund established in 2000 in memory of former RMBL student Ryan Kenneth Brown.

Brittney graduated with a Bachelor of Science in ecology and environmental sciences, and she saw herself becoming a marine biologist. But that was before RMBL captured her imagination. Here she was, high in the Colorado Rockies, studying micro invertebrates in the ponds at RMBL last year and, this summer, studying the food source of trout in the East River.

These adventures came about because although Brittney was leaning toward marine biology, she wanted to have a more well-rounded knowledge base as well as get some field research experience under her belt. The REU program at RMBL offered a way to do both. That’s how she ended up measuring the food sources of East River trout to see how a changing climate is affecting them.

As it happens, the trout like to feed on invertebrates that spend their juvenile lives on the riverbed. Some species of mayflies, mosquitoes, midges, and black flies start off in an aquatic form and then become terrestrial as adults. Trout prefer to cruise the riverbed feeding on the aquatic juveniles just as they emerge from their eggs. But as the climate has warmed, so has the river, and the warmer water triggers these aquatic insects to develop faster and leave the water sooner, which forces the trout to come to the surface to feed. Researchers want to know if the trout will be able to keep up with these changes.

Brittney’s specific project involved identifying, classifying, and measuring how much of the trout’s food comes from aquatic versus terrestrial insects. This summer, her work was affected by the season’s unusually heavy monsoon rains. As terrestrial insects don’t fly in the rain, there were fewer numbers coming to the river, putting less of that food source on the menu.

Finding the aquatic insects was a matter of collecting what she could find under rocks. But then Brittney’s task was to identify and count them under a microscope. And that unexpectedly turned out to be the funnest part of the research. Although Brittney said that looking at insects through a microscope for several hours can make your head spin, she added, “I was in another world. I got to see who they live around, what they like to live in; it was like being with aliens.”

The research is part of a larger study being conducted by Brad Taylor, assistant professor at North Carolina State University, who is looking at the effects of climate change on the river ecosystem. He and his colleagues are hoping to get an NSF grant to continue the research.

Brittney hopes they get the grant, too, especially if it allows her to return to the project at RMBL. She admits that the experience has given her a dilemma, though not an unhappy one. “I think I am being persuaded to go into freshwater ecosystems,” she said. “I also liked working with the insects, which is something I never thought I would hear myself say.”

Brittney Cleveland holds a Bachelor of Science degree in ecology and environmental sciences. She has been doing research at RMBL for the past two summers. Studying aquatics under Brad Taylor’s lab, she collected data on detritus processing in the montane ponds by non-caddisfly taxa during summer 2020 and invertebrate input into the East River during summer 2021. She plans to attend graduate school in 2022 and hopes to continue research at RMBL focusing on river ecology. Brittney is a marine biologist at a Los Angeles aquarium where she teaches.