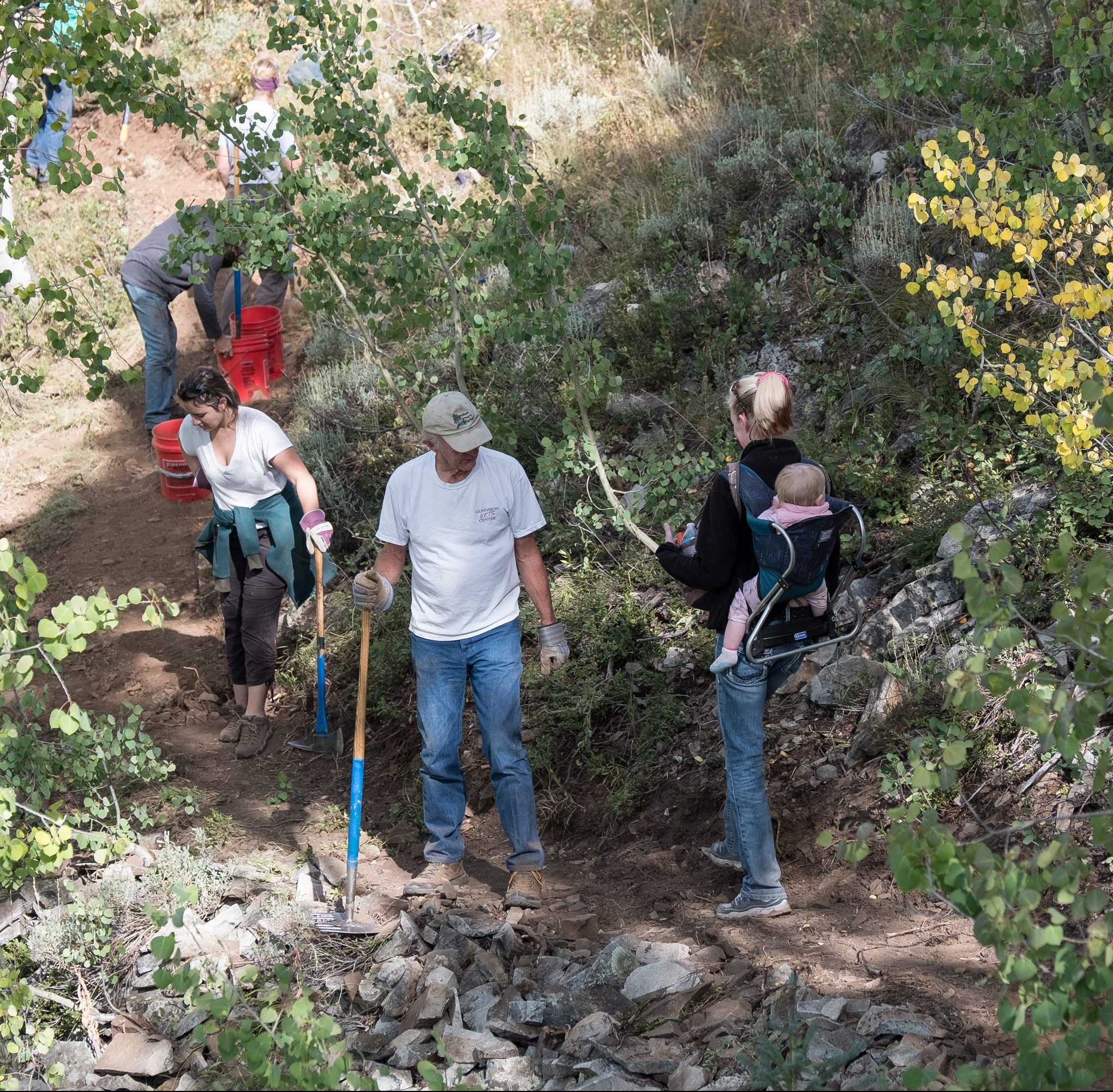 We don’t need to tell you how beautiful Colorado is. Beautiful places attract people. Lots of them. In the last 50 years our state’s population has grown from two million to nearly five and a half million. Most of those people use Colorado’s public lands — the parks, the recreation areas, the ski resorts — and the more these places are used the more likely they could become overused and damaged.

That’s why RMBL has taken the lead in stewardship of the land we depend on. We’ve been here over 90 years. If we’re going to continue our work for another century, we have to protect our resources.

Trails, for example. One of the most popular hiking trails in Gunnison County is the Judd Falls trail, which runs through RMBL property. Recently, around 50 members of Volunteers for Outdoor Colorado, or VOC, came here to work on it. Their weekend assignment was to create a new trail that’s friendlier, sustainable, and more accessible.

The trail that needed replacing was a social trail, meaning it simply evolved from steady use rather than being professionally built. Homemade trails like these aren’t sustainable. They erode, causing a host of ecological problems in the surrounding landscape. And they can be treacherous, given the rockiness of Colorado’s mountains. One VOC staff member said that the old Judd Falls trail was one of the rockiest she had ever seen.

Staying in the cabins at Gothic, the volunteers were blessed with terrific weather: warm, sunny, and mild. One volunteer, Jim Jacobson, who had not been to Gothic, said, “It was spectacular. It reminded me of 4H camp, only nicer.”

For Jacobson, who grew up in Montana, a highlight of the weekend was the talk given by science director Dr. Jennie Reithel at Saturday night’s dinner. She shared a history of RMBL and talked about what the scientists were studying and the global significance of their work.

Another volunteer, Zoe Hatch, participated because she said, “I wanted to make a difference, to do something that mattered.” A hiker, Hatch added, “I want to spread the word about the blood, sweat, and tears that go into making trails. I want people to know that a group of 50 humans built this trail with their own hands.”

Photographer Cosima Reichenbach documented the project. She noted, “It struck me as a hiker that I take trails for granted. It’s easy to forget where they come from.” As much as residents and tourists love Colorado’s wilderness, we often don’t consider the skill and hard work that make it accessible.

Working from a formal trail design, VOC volunteers rerouted around 800 feet of the roughly two-mile trail, building a new, sustainable pathway through RMBL that was properly graded, safer, and easier to navigate. As a bonus for hikers, the new trail netted a much prettier view of the Valley. Not bad for a weekend of labor.

More than 30 years old, VOC does a wide range of land management projects throughout the state, including building and maintaining trails, planting native species and controlling invasive weeds, planting trees and gardens in open spaces, and restoring fire- and flood-damaged lands.

As for the old trail, volunteers closed it off with large rocks, tree branches, and other rubble. Then they used soil digging tools to scarify the surface, which will make it more likely to revegetate and return to a natural state. What’s more, the project was so well organized and efficient that the workers were able to close the old trail and open the new one practically simultaneously.

RMBL facilities director Steve Jennison said, “Everyone was excited when the hikers started coming through the new trail. I think they felt like they did a positive thing.”

RMBL is fortunate to partner with organizations like VOC. More than 115,000 volunteers of all ages have participated in VOC projects. That number stands to grow if the projects continue to be as satisfying for the volunteers as the Judd Falls project was. As Jacobson said, “The sense of accomplishment we have when we’re done is just great.”

Who knew land management could be so rewarding? For more about VOC, visit www.voc.org.