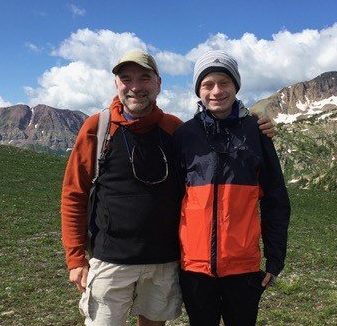 Want to know how to spark a kid’s fascination for science? Send them to RMBL summer camp. Case in point: Liam Atkins has been a regular in the summer education programs since he was just a little tyke of six. Now he’s 15 and has just finished the high school program. He’s loved every year of it.

Both Liam and his younger sister Paloma have consistently attended RMBL summer programs since they were preschoolers. Their parents, David Atkins and Deborah Wuttke, originally enrolled Liam in the camp as a way to keep him engaged. It worked.

David and Deborah are not researchers at RMBL, but they are scientists. David’s an environmental scientist who works for Shell, and Deborah is a biochemistry professor at the University of Colorado at Boulder, where the family lives.

To say they’re outdoorsy is an understatement. David has been coming to Crested Butte three decades for back-country skiing, Deborah for nearly as long. Besides being smitten with snow sports, they’re camping, backpacking, and hiking enthusiasts. Crested Butte has always been their go-to vacation destination. It was only a matter of time until they bought a home there. They’ve been part-time residents since 2012.

When the family explored the area as tourists, David said that he had heard of RMBL but knew little about it. Both he and Deborah liked the idea of involving the kids in science activities during the summer. “We’re very passionate about the outdoors and about climate change,” he said. “It all comes together at RMBL. It’s more than a camp.”

And so it all has come together for Liam. He has fond memories of every summer but says that the high school camp this past summer was the best yet. What made it special was that students were able to design their own experiments. For his, Liam compared the populations of small rodents in Gothic to those outside it. He was interested to see what impact humans have on the numbers. Over the course of three nights, he learned that the rodent populations outside of Gothic were twice that of the populations on campus.

At the end of the course, all the students made presentations of their experiments. Deborah, who constantly interacts with older students at CU Boulder, was impressed with the quality of the students’ work and said that the kids’ presentations would hold up well to those of the many university students she’s taught over the years.

Liam said that his favorite part of camp was seeing science, and scientists, in action. “I enjoyed learning about the scientific process,” he said. At RMBL, that means learning by doing. For example, after the class observed a stream biologist demonstrate the damage of algae overgrowth on a healthy stream, the students conducted similar experiments where they could see the dramatic effects of algae on a clear stream “with our own eyes.” Liam explained the takeaway: “That was a direct effect of climate change, because this year the snow melted super fast, so the water level died down and the stream slowed, and that caused a huge bloom in the algae.”

Of course, the true test of a great science education program is how it unlocks an enduring curiosity about science. In Liam’s case, he said, “I’m really interested in climate change research. A lot of long-term researchers go back to RMBL every summer to continue their research. Maybe I could be like that eventually.”

As far as the effects of the kids’ experience on the family, David commented, “On hikes, we notice that the kids know so much about what’s around them, why that flower is that color, why a hummingbird acts a certain way … they’re figuring things out that I didn’t learn until graduate school.”

And there have been unexpected treats, like hearing Liam come home talking about the great lunch he had that day, “like this amazing carrot and chickpea thing.” David said, “Not only did it open up his scientific mind, but it also opened up his culinary mind.” No doubt a welcome two-fer.

David grew up in Kansas City, MO and developed his love for the outdoors while fishing and hunting with his father. He has lived in Boulder since 1986, where he works on the environmental and social sustainability of resource development. During lock down, he has been working on recreating the magic of RMBL vegetarian cuisine. This week he successfully deployed a carrot and ginger curry soup for a family dinner.

Deborah grew up in Kingston, NY and developed her love for the outdoors — and discovered Crested Butte — while in graduate school in California. She came to CU Boulder in 1996, where she is a professor of biochemistry who studies the molecular processes underlying cancer and aging. She cherishes time in CB with her family.

Liam was born in Boulder and is in the 10th grade at Fairview High School. He enjoys mountain biking, skiing, hiking, and all things outdoors, particularly when located in CB. Paloma was also born in Boulder and is in 6th grade at Southern Hills Middle School. She keeps up nicely with Liam skiing, hiking, and mountain biking and has added rock climbing to our family outdoor mix.