A great educator is a force of nature.

Almost 2500 years ago Archimedes famously waxed poetic about fulcrums and torque: “Give me a place to stand and I will move the earth.” As high school physics students have long learned, with sufficient leverage, a small force can move worlds. There is an educational equivalent; the right mentor at the right time can shift the trajectory of a life.

Engaging students is woven into RMBL’s DNA, with mammalogy and botany courses starting with our founding in 1928. Given half a chance, long-time RMBL scientist Dr. Scott Wissinger would wax poetic about his students. He liked science, but he loved the opportunities that science gave his students. While publishing research mattered to him, he burst with pride when he talked about his students, describing families and careers. 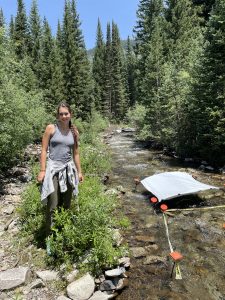 It’s so easy to get overwhelmed with the problems our world faces, now that our generation is waking up to the possibility that we could cause our own extinction. But within this dark awareness lies a spark of hope because the generation on our heels is not only aware but ready to act.

One example: Havalin Haskell. A high school senior, she’s lived in Crested Butte all her life. In fact, executive director Ian Billick and science director Jennifer Reithel used to be her neighbors. So she’s known about and admired RMBL for years.

Havalin’s one of those accomplished students who loves learning and could be a success in any field. But she wasn’t sure where her passion lay until she took the Introduction to Field Biology course at RMBL. That’s where she met the person who would become her mentor and idol, Dr. Bobbi Peckarsky, professor emeritus at Cornell University and honorary fellow and adjunct professor at the University of Wisconsin.