To know a place

What does it mean to know a place?

As a field scientist, knowing often involves quadrats, binoculars, and sensors—data we collect and mine for insight.  But there are other ways of knowing a place.  One spring when I was at graduate student in San Diego, avid snowpack watcher billy barr gave me hope in early May—“come on out!  The road might be open soon.”  After two days of driving to get to Gothic as fast as I could, I spent a month sleeping on a friend’s couch watching storms.  One hundred and fifty inches of snow later, the county opened the road on June 9th, with snowbanks piled 10 feet high. I “knew” Gothic better; snow in the high country was less a vague abstraction.  The intensity of seeing winter extend into June opened my eyes to how dramatically snow shapes the plants and animals around Gothic. 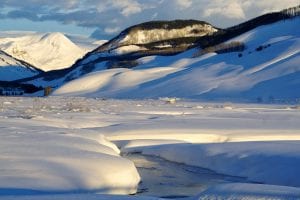 Sixty to 90 percent of the world’s water comes from mountainous watersheds. And 100 percent of them are being affected by climate change. This is what makes environmental research at RMBL so critical. Without water, there’s no life. Without knowing how our water resources are changing, there’s no future.

To get a deeper understanding of how watersheds are responding to environmental changes takes continual study all year long. Most of the scientists who do research at RMBL spend June through August gathering data. They follow the academic calendar because the rest of the year is spent on their day jobs — teaching future scientists at colleges and universities. They bring students with them as research assistants and colleagues. For many of these students, the experience at RMBL launches their career. They often return for subsequent summers. Some even uproot their lives and move here. Amanda Henderson is one of those. She lives in Crested Butte and conducts research at RMBL all year.