Chasing Dragons: From the Royal Observatory in Greenwich to an Outhouse in Gothic

This spring my family visited London, taking one last family trip after opportunities lost to covid before our oldest son leaves for college. A highlight was visiting the Old Royal Observatory. Stepping off a ferry on the Thames, we grabbed a coffee in Greenwich Village, walked past the National Maritime Museum (“Dad, how can you spend so much time looking at old things??”), through the park to see an early “field site”; the observatory was commissioned in 1675 by King Charles II. Appointed royal astronomer John Flamsteed and his family stayed rent free. But charged with tracking the motions of heavens, he kept odd hours.

Astronomy was important because of longitude. For better and worse, ships were pouring out of the Thames mapping the world, “chasing the dragons away.”  A look at the Hunt-Lenox Globe, ca. 1510, reveals “Hic sunt dracones,” or “Here be dragons.” Dragons existed, but since nobody knew where, they had to be in regions unexplored. As mapmakers filled in blank spots, the dragons fled.

Not all ships returned. However, if captains knew where they were relative to reefs and shorelines, they would be more likely to bring their crews back alive. Using a sextant to measure the angle of the noon sun for latitude (north/south) was easy. Knowing longitude (east/west), however, involved tracking noon in Greenwich. Clocks of the time did not hold up to humidity and the rocking of the ships. Hence astronomy.

Time is an important theme at RMBL. RMBL’s drones and sensors depend critically upon time to make precise measurements. Another example: Dr. Colin Pittendrigh, father of the biological clock, grew fly larvae varying light (Gothic outhouse), temperature (East River), and pressure (pressure cooker), finding an internal clock (think jet lag). In a small way this led to a Nobel Prize in Physiology awarded for elucidating the molecular mechanisms of the biological clock. 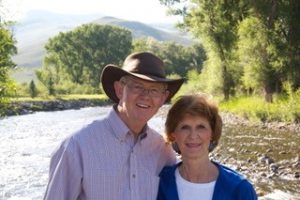 For decades, RMBL has hosted world-renowned scientists, supporting their research with field sites, lab facilities, housing, technological and logistical assistance, and access to historic data. We have achieved this as an independent, nonprofit field laboratory, not affiliated with an academic institution or the government. What keeps RMBL in operation is philanthropy. From the work of volunteers to seven-figure donations, we celebrate all the philanthropic acts that sustain us and acknowledge the donors behind them. Some givers relish the public attention. Sandra Estess is not one of those.

She’s not interested in seeing her name in lights. Yet she and the Estess children — Elizabeth, Catherine, and Blake — are making a $2 million gift to RMBL to purchase the land for a year-round campus at Mt. Crested Butte. The gift is made in honor of their father and Sandra’s husband, Dr. Henry Estess, who died in 2018 at the age of 80.