What can Red Rock Mountain tell us about the Red Planet?

What can Red Rock Mountain tell us about the Red Planet?

Red Rock rises just south and east of Gothic. A relatively easy climb with good south facing exposure, it is a popular first hike for RMBL students without a lot of experience. Ferdinand Hayden, visiting the East River valley 150 years ago, indicated Red Mountain was laid down during the Carboniferous period about 300 million years ago, a time also known as the Age of Amphibians. Many years later Dr. Ralph Langenheim emphasized the complexity of the geology of the area and assigned Red Rock and surrounding areas to the Gothic formation, emerging just before the Maroon Formation. Red Rock is teeming with life, past (e.g., marine organisms and decayed/compressed plant material) and present (e.g., aspen trees, wildflowers, mountain goats, and students).

Given that RMBL is an organization dedicated to the study of life, primarily focused on the Gunnison Basin, a connection to Mars seems a stretch. Not only is Mars tens of millions of miles away, but the question of whether life exists, or ever existed, on the Red Planet, or Mars, is a major area of scientific investigation. In 2018 I was sitting in the Gothic coffee shop realizing that there were several, different scientific conversations going on about Mars. Coincidence or sign of a cosmic convergence? 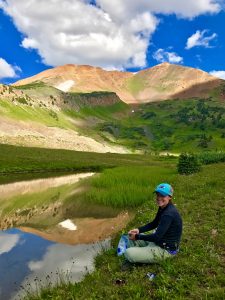 You don’t have to be a scientist to know that carbon is the key to life. Everything on Earth is fundamentally made from carbon, and since our planet itself is a self-contained environment, the amount of carbon stays the same. It simply moves around, cycling from the Earth to the atmosphere and back again. The problem occurs when there’s an imbalance. Right now, there’s too much of it in the atmosphere in the form of carbon dioxide (CO2), more than there has been in 800,000 years. And because CO2 absorbs heat, it’s a major player in climate change.

The more we understand the carbon cycle — where it’s stored on Earth, how it moves into the atmosphere, and what drives the whole process — the better we can predict what the future holds for our planet and how to prepare for it.

One scientist who is deeply enmeshed in the carbon cycle is Dr. Kate Maher of Stanford University. She was introduced to RMBL through the Lawrence Berkeley National Laboratory. In 2015, the Department of Energy was encouraging researchers to look into the intersection between climate change and carbon cycling with the goal of improving models to help science understand the global connections between climate change and ecosystems. Dr. Maher came to scout sites at RMBL to see whether they would work for her research.