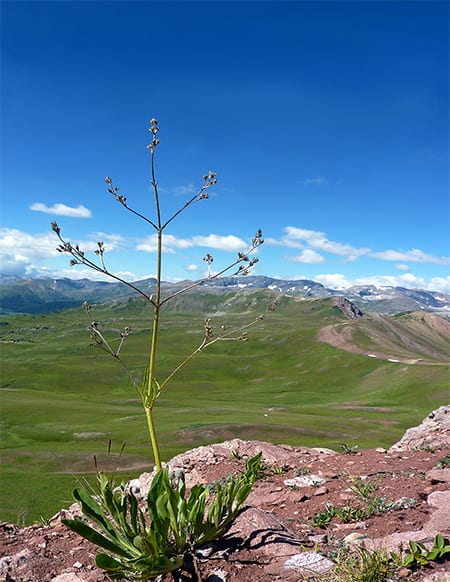 Climate Change is Different for Males and Females

Scientists have been observing the effects of climate change on plants for decades. And most studies have treated all individuals in a species the same. But whereas most plant species are hermaphroditic – where individuals are both male and female – 10 percent of them are dioecious, meaning that, like most animals, individual plants are either male or female. Could the sexes in dioecious species respond differently to climate change? Yes, according to RMBL scientists Dr. Kailen Mooney, Dr. William Petry, and colleagues, who have documented sex-specific responses to climate change in the valerian plant (Valeriana edulis) that grows at RMBL. They published their findings in a June 2016 article in the journal Science.

Their work is important because if climate change affects males and females differently, it could affect reproduction. Dr. Mooney’s team has shown that a warming climate has changed the sex ratios of the valerian plant over four decades and across its 1800-meter elevation range.

At higher elevations, females far outnumber males. This is because females prefer a wetter environment, and more snowpack at higher elevations means more soil moisture. But females cannot reproduce without males, so fewer males could lead to population decline.

On the other hand, males are moving up. Because the climate is warming, the warmer, drier climate of lower elevations is creeping up the mountain, making the higher elevations more arid and friendlier to males. What do these shifts mean for the valerian plant population? And how does this affect the herbivores that feed on them? That remains to be seen. But RMBL scientists are on the frontlines of the search for answers. Nothing is yet known about sex-specific response to climate change in any species, so what RMBL scientists learn about this plant could help us understand how all species, both plant and animal, may respond to climate change.

What makes this a uniquely RMBL story is how Drs. Mooney and Petry’s research came about, aided by RMBL’s community of scientists and its long-term studies. When Dr. Mooney started his position at UC Irvine, he wanted to conduct research at RMBL, both because of its scientific reputation and because he knew that the family-friendly environment would make it easy to spend summers there with his wife and two young kids.

During his second summer at RMBL he mentored an undergraduate, William Petry, who was interested in studying the insects that lived on valerian plants. When Petry observed the decline in the ratio of males to females at higher elevations, he followed Dr. Mooney to UC Irvine to get his PhD studying this intriguing pattern.

Petry wondered whether other research on the plant existed. Sure enough, he uncovered a 1977 unpublished thesis by Dr. Judith Soule, who had made her own observations about valerian sex ratios. After Petry tracked her down, Soule generously offered to share her notes with him, including the exact locations of the plants she had studied.

Having Soule’s notes allowed Petry to revisit the precise locations previously observed and to document the changes in sex ratio over a 40-year period. As it takes decades to see the effects of climate change, Soule’s observations from the 70s proved priceless.

While conducting his PhD research, Will mentored undergraduate Ana Chicas-Mosier who conducted an independent research project on valerian under his guidance. Ana documented that the shortage of males in high elevation populations resulted in a shortage of pollen that reduced seed production in female plants. This shows that the skewed sex ratio really matters. Furthermore, to understand how the timing of valerian flowering has responded to climate change, the researchers also collaborated with Dr. David Inouye, who maintains a long-term study of plant phenology (flowering times).

Drs. Mooney and Petry are continuing their study of valerian with funding from the National Science Foundation. They are conducting experiments to manipulate temperature and melting snow to simulate climate change, which will provide information especially useful to show causation, which is vital to reaching certainty about the effects of climate change.

Without the work begun by Dr. Soule in 1977, these scientists would not have been able to achieve the research that led to their Science paper. Indeed, without RMBL’s inclusive, welcoming atmosphere, Dr. Soule might not have done her research there. And without RMBL’s familial, collegial environment and long-term studies, Dr. Mooney might not have made it his research site. He then would not have mentored Dr. Petry, who would not have gone on to mentor Dr. Chicas-Mosier. Science would have carried on without the influential research of these scientists. But it would have missed important insights about our global climate, not to mention the effects RMBL’s climate of supportive researchers is having on tomorrow’s scientists.

Kailen Mooney is Professor of Ecology & Evolutionary Biology at the University of California Irvine, the Director of UCI-NATURE, and Board President of the Rocky Mountain Biological Laboratory, where he is a research scientist.